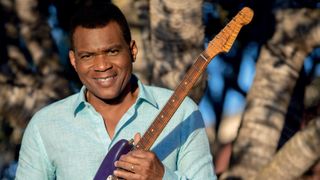 Robert Cray with his (hardtail) signature Fender Strat — "I don’t use a whammy bar, so there’s no reason to have one. I get the vibrato from my hands," he says (Image credit: Jeff Katz)

This Georgia-born guitar-slinger’s style and Strat tone are instantly recognizable.

Robert Cray has recorded with Eric Clapton, performed with a who’s who of blues legends, from Stevie Ray Vaughan to B.B. King to Hubert Sumlin, and just released a funky new album called That’s What I Heard?

But what Guitar World readers really want to know is...

What amps and effects are you using these days? - Jason Allwood

"Right now I play through two Matchless Clubman 35 brains and speaker cabinets and I also use a Fender Vibro-King. I use the Matchless for the times I use vibrato so that I can have it in stereo, and I use the Vibro-King on its own for certain tunes.

"Other than that it’s a vibrato unit my guitar tech made for me that he got from the schematic of the original Magnatone so I could have that mono vibrato. A little bit of reverb and that’s it."

Why did you call your latest album That’s What I Heard? - K. Fuller

"Because it’s got a little bit of everything. We did a bunch of covers by some of my favorite artists, like Curtis Mayfield and Bobby “Blue” Bland. There’s also a funky groove by Don Gardner (My Baby Likes to Boogaloo) along with a Sensational Nightingales song, Burying Ground, which is a gospel tune. Then there’s some tunes we wrote as well."

The new album has a Sam Cooke vibe to it. Was that by design? - Andrew Narvaez

"The whole idea came about because [producer] Steve Jordan wanted to take us into Capitol Studios [in Hollywood]. It was the first time for us there as a band and it was amazing. Just being in that studio with the great engineers, microphones and the atmosphere that place exudes was exciting.

"Seeing the old photos on the wall and knowing all the great artists who performed there. The reverb system that Les Paul built is still in existence there - as well as all of the charm."

Steve Perry joined in on vocals for Promises You Can’t Keep on the new album. How did he get involved? - S. Robinson

"There’s an upstairs room in Studio B at Capitol that I was in after we had taken a break. I remember coming down the stairs and seeing this guy standing in the doorway. I thought, 'Wow, they must have left the door open and people are just wandering around in the halls.'

"Then I did a double take when I recognized who it was. Steve had actually come by to visit his friend, Niko Bolas, who was one of the engineers. He wound up hanging out with us all day and we invited him to sing on that track."

How would you personally describe your songwriting process? - Dan Crowley

"Ideas can come from all different kinds of situations. Sometimes I’ll hear music when I’m in the shower or if I’m chopping vegetables or just hanging out. That’s when I’ll go into a little room I work in and try to make the idea come to fruition. Whether it’s just playing on the guitar or recording the idea. However I can get it, I’ll take it."

Do you have any notion or idea when it comes to delivering a solo? - Robert Bauer

"I just improvise and let it fly. I think it works best that way. You just go in and start playing and when it comes time for the solo, it’s what you’re feeling right then and there."

If we went through your record collection, is there anything we might be surprised to find? - Kevin Zarnett

If you could go back in time, what d'you think you'd say to the early '80s version of yourself? - Mark Mastman

"I wouldn’t go back and change a thing. Everything you do is part of learning."

Why did you gravitate toward using hardtail Strats, and what do you like most about them? - Chris Hudson

"The reason I initially did was because they stayed in tune. I don’t use a whammy bar so there’s no reason to have one. I get the vibrato from my hands and then straight to an amplifier."

What are some of the things you learned about Stevie Ray Vaughan - not only as a guitarist but as a person? - Austin Silvis

"Just how much of a great guy he was. Stevie was always interested in learning something all the time. That was his thing. If he didn’t know the chord I was playing, he’d ask me how to play it.

After the release of 1986’s Strong Persuader, did you find there was a lot of pressure to try to somehow recreate its success? - J. Siddons

"I didn’t think of it as pressure, but the success of that album sure got us back into the studio pretty quickly [Laughs]. But I wouldn’t change a thing. Don’t Be Afraid of the Dark [1988] was the album that came out afterwards and that did fairly well too."

A lot of the songs from Strong Persuader, like Right Next Door and I Guess I Showed Her, capture truth in life. What’s your technique for conveying that truth from the lyrics and then using the guitar to fill in the emotion? - Kath Galasso

"Once again, it’s doing what the song calls for. Some of those songs were co-writes where someone like Bruce Bromberg or Dennis Walker might have just written the lyrics and then the band would put together the music. We would all just look at the lyrics and they would tell us where the music was supposed to go.

"Other times we’d be given both the lyrics and music for the song, but our interpretation of that music could change. You just have to put yourself into the moment and feeling of the song."

What made you gravitate toward blues guitar? - T.R. Smith

"When I was a teen I was hanging out with guitar players after school and we had another friend who was listening to the blues. He had guys like BB [King], Buddy Guy, Muddy Waters and Howlin’ Wolf. We were like, 'who are these guys?'

"They had such cool names and we were fascinated by all the double entendres in the lyrics. Then we heard about Robert Johnson and his so-called association with the devil.

"All of us wanted to be bluesmen. I remember going to see Albert Collins play at an outdoor festival when I was 15 and he just killed everybody that was before him and afterwards - walking through the audience and everything. It was fantastic."

Who was your greatest influence when you first started playing? - John Ross

"Albert Collins was really influential for myself and the band in the early days. We actually got to work with Albert as his backup band for a period of about a year and a half in the mid '70s.

"I remember one of the biggest gigs we ever played with him was in 1977 at the San Francisco Blues Festival. At the time, we were all just kids in our early 20s and Albert was like a father figure to us. We learned how to support a frontman of his caliber and he taught us how to collect our money from scrupulous bar owners [Laughs]. I learned a lot from Albert."

You saw Jimi Hendrix perform a few times. Can you talk about that experience and the effect it had on you as an up-and-coming guitarist? - Ian Wyatt

"The first time I heard Jimi’s music it was by a cover band. I heard that dissonant sound of the intro to Purple Haze and was like, 'What is this?!' I saw Hendrix for the first time at the Seattle Center Coliseum. At the time he had Noel Redding’s band, Fat Mattress, open up.

"That was cool but I was so far away that he looked like a little speck. The last time I saw him was the last show at Sick’s Stadium [in Seattle]. I was really close for that one, and it was fantastic. The thing I liked most about Hendrix’s music was his sense of melody."

When you listen to it, he was a great lyricist as well. Which new artists are you listening to? - Zac Costilla

What are your top three desert island albums? - Floyd C.

"Nucleus of Soul by O.V. Wright. As for the other two I couldn’t tell you [Laughs]. It changes every day."

Of all the highlights of your career, what sticks out as most memorable? - Amy Phillips

"I’d probably go back to when I was a teen and hanging out with my friends, Richard Cousins and Bobby Murray. We all wanted to be blues musicians and years later the three of us had the opportunity to work on BB King’s Blues Summit [1993].

You worked a lot with Eric Clapton on Journeyman [1989]. What was that experience like? - Mark Kluk

"It was great. Eric was one of the first guys to come see us play when we made our first trips to London. We became friends and did some dates together and then he asked us to do the record. Being in the studio was so casual and Eric made us feel so comfortable.

"Toward the end of one day he started playing the beginning chords of Old Love. The two of us started playing it together and I added some bits to the music. After we had the song down he suggested we both go home and each of us write a verse and see what we had when we came back. That’s how we wrote it."

"We want to keep doing what we’re doing, and that’s playing and recording. That’s what we hope we can accomplish with this new record. It’s been a lot of fun - and it still is."

You seem to always play the right notes. How did you develop such tasty chops? - Michael Mc

"It’s about being in the song. It’s easy to go into automatic mode, and I think that’s what you should try to avoid. When you go automatic you just start playing notes with no particular direction. I’m constantly trying to keep myself aware at all times of where I am in the tune."