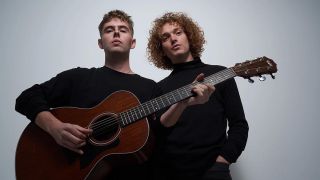 In 2009, Harry Draper tuned in to Radio 2 and his life changed. The legendary John Martyn had just died, and the station was presenting a tribute.

“They played May You Never,” Draper recalls, “and I’d never heard that sound before – the fingerpicking, the arpeggios, the slapping. I became obsessed with him and went back through his whole catalogue. I went from a 13 year-old who’d never played guitar to wanting to play May You Never, and I didn’t put the guitar down until I could. John Martyn is the reason I got into playing.”

Now 24, Draper is one half of Yorkshire duo Seafret, completed by singer Jack Sedman, and their emotionally-charged pop ballads have found a huge audience online.

Since the release of 2016 debut album Tell Me It’s Real they’ve clocked up over 300 million streams on Apple Music and Spotify. Their single Oceans has been played over 100 million times on Spotify, where Seafret are streamed on average two million times per month. Their stylish, gritty YouTube videos have been viewed over 170 million times, with Game Of Thrones star Maisie Williams starring in the clip for Oceans.

“It’s hard for us to believe,” says Draper. “It blows our minds. We just always loved playing and writing tunes and playing in pubs, then suddenly we got signed, wrote the album and it’s gone from there. We wrote Oceans in an hour after being in the pub. It’s only three chords! We go all over the world and we have to play that one.”

The duo have performed extensively across the UK, Europe, Russia and Brazil and they’ve opened for Lewis Capaldi, Hozier, James Bay and – in their home town of Bridlington – Jake Bugg. “These are all artists we really respect”, says Draper. “We’ve been very lucky.”

Draper met Sedman nine years ago at an open-mic night at a small pub in Sewerby, Yorkshire. The guitarist was playing banjo with his dad’s band, and the singer was about to do his very first public turn. He sang James Morrison and Paolo Nutini songs, and impressed Draper enough to suggest they jam, where they hit it off.

After a slew of gigs playing covers at local boozers they started writing original material and adopted the name Seafret (a rolling mist that comes in off the sea). They quickly came to the attention of record producer Steve Harris (Kaiser Chiefs) and signed to Sweet Jane Recordings via Sony’s Columbia label in 2014, with Tell Me It’s Real following two years later.

“The first record was recorded over two years in various studios across London,” says Draper, “but the new one feels like an album. It was all recorded in two months in one place, Rocket Science Studios in Glasgow – just me, Jack and our producer, Ross [Hamilton].

“We limited ourselves to four guitars, bass, piano, a couple of synths and amps. It’s more raw, there’s less on it, but we have a lot more experience now, and more confidence. We are being ourselves as writers, musicians and people this time.”

In the studio, Draper played a Gibson J-200, with a Martin D-18 for ‘the strummier parts’ and his £200 Yamaha classical guitar when a nylon tone was needed.

All electric passages were played on his Japanese Fender Telecaster, usually through a Fender Twin Reverb. His pedalboard includes a TC Electronics Prophet Delay, Hall Of Fame Reverb, Overdrive and a Boss OC-3 Super Octave.

“I set the octave so it picks up the bottom end and puts it an octave lower. I use that live, it’s low in the mix and you hardly notice it but it gives the choruses a boost - it sounds good through the subs. I stole the idea off Jon Gomm!”

As modern as they are, Seafret have been compared to another iconic acoustic duo, Simon And Garfunkel.

“Yeah,” says Draper with a laugh. “We’ve had that a few times. I love Paul’s guitar playing, the way he pronounces some notes and misses others out to complement the vocal. Art had such a beautiful voice, and so has Jack. He’s got the hair, too!”