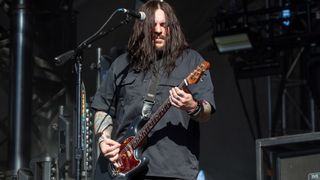 “I grew up on a pig farm in South Africa and now live in Nashville, right in the heartland of country,” says Seether singer/guitarist Shaun Morgan. Since forming in 1999, originally under the name Saron Gas, his band have become one of the biggest - if not the biggest - rock groups to come from that part of the world.

“Which is great ‘cause I was raised on Kenny Rogers and Dolly Parton,” continues Morgan. “And now I am managed by the same people as Dolly! So it’s kinda weird how life takes you on this journey. I’m very proud of what we’ve achieved.”

The quartet will be releasing their eighth full-length - titled Si Vis Pacem, Para Bellum - this year. As the principle songwriter, the frontman describes the experience as more free and creative than on previous endeavors, allowing himself the time to craft and mould each song meticulously instead of feeling pressured to deliver on deadline…

“Usually I have to get an album ready by the middle of the year, to go directly into a studio and finish it by the end of the year with plans to release for an early release the following year,” explains Morgan. “In the past that’s been a thing that’s weighed me down a little bit.

"Usually, the label will expect you to finish touring within a year and a half to two years and then you’re straight back to the writing room. You need to bash out 15 songs in a few months, record them and so the cycle continues…

“This time I didn’t have that. I wasn’t in any kind of rush. I enjoyed taking my time to look at the songs from all angles and really analyze which parts were better than others. So if a bridge wasn’t strong enough, I’d throw it out and rewrite the whole section. Or take a section and write a completely different song around it. It felt like forever since I was in a studio and writing music there.”

There’s also been a bit of an overhaul with the frontman’s rig, switching from Mesa/Boogie to Bogner (“for a fuller sound with more low end and enough treble to still cut through clearly”) and from Schecter to Ernie Ball Music Man for his six-string weapons of choice.

“I felt like a lot of my needs weren’t being met by Schecter,” says Morgan. “I wasn’t living anywhere near California anymore so there wasn’t much of a personal relationship. It seemed to deteriorate over the years, which is sad - I’d been playing Schecters for about 15 or 16 years. I loved the guitars. Live, they took a beating and kept going, so were good touring guitars…

“We just happened to reach out to Music Man when that relationship soured because they were already looking after us for strings and picks. My tech asked if we could get some sent over and they said yes.

"Right now I have five on my boat, I mainly play the Stingray. It’s a little smaller than the Schecters I played, my signature was like a Moserite rip-off because I always thought those guitars looked cool. The bodies are a little smaller but the tone’s much more full…”

So it looks like you’ll be playing Music Man guitars for quite a while?

“They’ve been great, even on day two of NAMM - which is when nobody can send anything out, not even a tuning peg – they sent me a guitar! They’re obviously a capable and enthusiastic company. It’s nice to have that energy again, where somebody is excited for you to play their guitar.

“Quality-wise, Music Man make fantastic guitars, probably the best I’ve ever played and I’ve tried them all from PRS to Fender. They are a cut above the rest, I absolutely adore them.

"They even made the Mesa clean sound work for me, the Triple Recs aren’t known for being awesome for that. It certainly wasn’t awesome with the Schecters - it was just a basic clean, not bad or particularly good. You can be a bit fast and loose with your cleans live, unless you use clean a lot.”

And what about leaving Mesa/Boogie?

“The guy we knew at Mesa had left, we didn’t really know anyone else there. They were always the amps I wanted, we didn’t get them in South Africa so that’s what I played as soon as we came to the States in 2002.

"Over the years, the Bogners have taken a more front and center role on the dirty sound. The Mesa might bring some color, but the Bogner does all the heavy lifting.

“So I used my head on the album but I haven’t even played it live yet because everything got shut down. I’ve got this big beautiful rig with four heads and four cabs, all ready to go, but I haven’t even touched it yet which is sad. I can’t wait to hear the Music Man through the Bogners live on stage. The combination sounds awesome.

We also used some Dean guitars with Evertune bridges - which are great, you just tune the guitar one time and it stays. The Deans sounded killer too! We’ve moved to higher-end guitars for more of a rich sound.”

“Yeah, I don’t really use pedals. Most of that stuff goes to Corey [Lowery], he runs a Kemper live with all the patches and rigs used on the albums - even on the last album, we used a lot of Kemper stuff.

"It’s crazy how you can take those rigs on a drive, plug into different Kempers and dial in the same exact tones.

“I tend to use the amp distortion and some delay, usually the Boss one, which can loop sounds, noises or riffs during guitar changes when we play live. So I’ve never been much of a pedal guy.

"I’ve got a Dunlop wah, on the odd chance I’m playing a solo or want some extra color, and that’s it.”

Tone-wise, the new album feels like a mixture of '90s alternative rock sounds and more experimental parts too…

“I wanted to be true to the Seether sound, because I love that '90s-era riff kinda energy, but I also wanted some more atmospheric A Perfect Circle or Deftones-influenced ideas. They have those beautiful ethereal moments which I’ve always enjoyed. I spent a lot of time listening to those bands throughout 2017 and 2018. I listen to them a lot to get through the dark times.

“Writing this time, I had two main goals - to deliver something that Seether fans will want to hear, without being redundant or repeating myself. It had to be familiar. But on the other side of the coin, I wanted to branch out a bit. I wanted to make the bridges more interesting than I have in the past, not all of them have them but I really made it count when they did.

"I got tired of the verse/pre-chorus/chorus formula. I’ve done it the past, don’t get me wrong, and it’s fine. But some of these songs needed a different route.”

What do you think are the fundamentals behind those classic alternative rock guitar tones and riffs?

“It’s funny because the word alternative has shifted in the States to something that doesn’t include guitar at all. Now you hear bands like Twenty One Pilots or Imagine Dragons on those alternative stations.

"But for me, it was all about Alice In Chains, Pearl Jam, Nirvana, Smashing Pumpkins and obviously Soundgarden.

“Those bands had their own brash sounds, each with a different style of distortion pedal or amp and guitar combination. Soundgarden were darker and heavier, while Nirvana were a single-coil through a Mesa I believe. That era of bands or definition of alternative had a recklessness to it. All of it was a bit chaotic…”

With no shortage of fuzz and feedback!

“I’m a huge fan of feedback, though I understand it’s not something that’s pleasant to most ears! When I hear that live or in recorded music, it stirs up passion and emotions. I enjoy that visceral sound, it makes my hairs stand on-end.

"Every person will sound different. Often, the simpler it is, the better. Someone like Kim Thayil is a genius, he has a very unique approach.

“If you crank your amp and just beat on your guitar, that will help. My first guitar was a Starfire through a Gorilla amp. It sounded terrible, but it was about the emotion I got out of it. That joy you feel from the sound is important.

"Some of those grunge guitarists are really good players, but they put aside finesse for the sake of emotion, to make a more primal performance. It wasn’t as neat and tidy as alternative is today, which is very polished and pop-sounding.”

Though you have been based in the US for quite some time, do you still keep up to date with the South African rock/metal scene?

“There is no infrastructure to support rock music in South Africa. There were some bands in the '90s when I was in high school, like Springbok Nude Girls, Amersham, Lithium and Squeal - as you can tell from the names, they were deeply rooted in the grunge era.

"There was a boom back then. I remember going to bars all the time, either to watch them or open for them back in the day.

“But a lot of those guys, even if they had a number one hit on the radio and were touring, they still needed to have day jobs. It was the same for us, we’d go on a six week tour and come back with just a couple of hundred [South African] Rand left to pay our drummer’s electric bill. We did it for the love of it.

"But we moved to the States and it became my job, and it’s gone on for 20 years which is something I never thought would happen. I thought we’d come here and flame out just like all the thousands of other bands.”

What do you think were the main reasons behind the lack of infrastructure?

"It’s quite difficult to find out what’s happening back there, I have very few friends there but they’re all grown up with families. You lose touch with the scene very quickly because it’s vastly underground.

“There was a South African band called Just Ginger who wrote great songs, though I didn’t get on with the singer. They went to LA and ended up turning back around and coming back to South Africa. We were lucky because we got signed to a US label who brought us over and marketed us.

"It’s a lot harder to come over unsigned and try to get a deal. There are thousands and thousands of bands in the US. I recently delved back into my favorite South African bands and there’s one called Marlowe that I loved. It was a three-piece group, two guitarists and a drummer, and they sounded like a prog-rock/metal Muse, with elements of Radiohead. I think they’re one of the best bands to come out of South Africa."

Si Vis Pacem Para Bellum is out on August 28 2020 via Spinefarm Records.