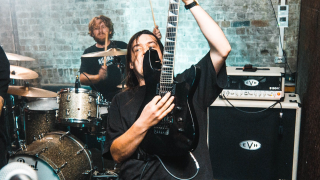 HAILS FROM: Sydney, NSW
PLAYS IN: Justice For The Damned
SOUNDS LIKE: Thick, fast and punishing death metal
LATEST DROP: Pain Is Power (LP out now via Greyscale)

What’s your current go-to guitar?
My go-to for everything heavy is my Jackson USA Select Soloist SL2H. It was by happenstance that my rep had this lying around at the HQ when I first began my relationship with Jackson. It was destined to go to a store unless I wanted it, and he offered me a great deal on it – I took the chance and fell in love with it. It just feels right in my hands, it’s so comfortable and sounds amazing. Not only that, but after taking it out on so many tours and recording all of our music with it, it’s gained tremendous sentimental value. I truly believe that I’ll be using this guitar forever.

How did you initially fall in love with the instrument?
My introduction to music and the concept of being in a band started with Guitar Hero. I got really into the game, and after a year or so I started to really like the idea of playing for real and starting a band with some friends that were also playing a lot. My first guitar was an L&D Luthier’s Les Paul knockoff – not a great guitar, but a solid one for someone just learning. The story isn’t too out there! Really I just went into the store with my mum and played around on various guitars for a few hours until we settled on that one. I was lucky to have a very supportive mum! I believe I was 12 or 13 at the time.

What inspires you as a player?
I’m influenced by countless other guitarists to varying degrees. But one guitarist that really inspired me when I was developing as a player (and still does today) is Marc Okubo from Veil Of Maya. In my late teens, I listened to his band religiously and admired his playing hugely. I didn’t go on to play music much like that in my own band, but I’ve always felt that pieces of his influence are deeply embedded in my playing when I’m just jamming, or when I’m writing. It’s subtle but I know it’s there.

Are you much of a gear nerd?
Somewhat! I feel like I can nerd out to a certain degree. I’m really into pedals. Being in a band that rocks the HM2 style tones, I do have a few HM2 variants, my favourite easily being the very limited Nails ‘Tyrant’ pedal by Dunwich Amps. It’s the most intense when you max out the parameters, but I feel it’s also the most balanced and easy to work with. You can pull it back and get a broader range of sounds than others that I have tried. I also have a soft spot for modulation effects and my recently acquired Ibanez FL9 Flanger has quickly become a favourite.

Do you have any ‘white whales’?
Aside from wanting to continuously expand my pedal collection, over the last year I started to really like Jackson Warrior guitars, and now I really want one. Specifically, I’ve been eyeing off the USA Select Warrior WR1 in Gloss Black. They look like absolute riff machines!

What would your signature model look like?
I would very much like to have something similar to my USA Soloist. I think on some of the specs we’d be looking at a reverse headstock, black in colour with some kind of cool finish. An ebony fingerboard for sure, black hardware, 25.5-inch scale length, no fret markers (or one fret marker on the 12th fret) and probably the Seymour Duncan Black Winter pickups. The rest is undecided at this point!

If you could jam with any guitarist, dead or alive...
I’d have to borrow from one of my previous answers and have a jam with Marc Okubo. I’d love to just sit and learn Veil Of Maya riffs from the man himself!