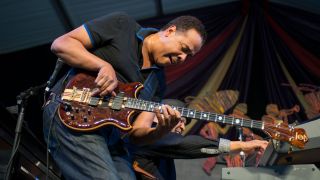 Soundtracks aren’t new to Stanley Clarke; he has been scoring for movies and television programs since the 1980s, with more than 70 projects to his name - everything from the Academy Award-nominated Boyz N The Hood [1991], to an episode of Angela Lansbury’s detective series Murder, She Wrote.

That experience doesn’t mean the process has become routine for the legendary bass player. In fact, his recent project, the soundtrack for director Frederic Tcheng’s critically acclaimed Halston, released alongside the film back in June, was his first time writing for a documentary of its kind. Halston chronicles the American designer’s beginnings, international success in the 1970s, and tragic end.

Tcheng combined archival footage and interviews with the fashion icon’s family, friends, and colleagues to tell the story. Clarke’s role was to tell that same story instrumentally, providing an emotional tapestry that enhances the film’s visuals and dialogue without overshadowing either, and connecting scenes for seamless continuity as the story progresses.

“As a film composer, you’re not a standalone artist deciding what music you’re going to put out there,” he says. “The film composers that last long, and definitely as long as I have, understand that you’re a part of an overall package of many different elements, and the people that are in charge of those elements have one goal, which is a picture that has some sort of message that people sitting in a theatre will understand.

"Writing for film is a great art form. It’s not a traditional musical art, because you’re part of all these different elements that go into making a film, but sometimes it can be extremely artistic, especially when you’re dealing with something brand new."

“I liked working on Halston because I had never done a documentary like this one,” he says. “The director was really creative, a super-nice guy who was easy to work with and understand. He knew exactly what he wanted. It plays like a movie with a story. It doesn’t jump around like some documentaries you see. It has a linear feel.

"He was very open with the music. He wanted some jazz for the New York scene; that was like a musical subtext. I imagine Halston might have liked jazz- he might not; he was in the discos a lot, so who knows - but it seems to work. There was disco music in it, and regular orchestral stuff done with synthesizers. I have music in there that might sound like Debussy, and then there’s other stuff that’s unique to me. It was a cool experience.”

For Clarke, scoring the film was almost second nature, not only because of his decades of experience, but also because he could write visually and personally, having been a part of the New York City fabric during the time Halston’s meteoric rise took place.

“I was born in Philadelphia, and around the age of 18 or 19, I went to New York,” he says, “and so I know what the city felt like and smelled like and was like. I’m a little younger than a lot of the people in the documentary, but I was in New York during the Studio 54 years. My sister wore Halston clothes, my mother wore Halston clothes, so as far as Halston himself, I knew just as much as anyone else, the average American person, knows about fashion.”

Another unique aspect to the process was that Halston did not have a script from which Clarke could read and compose. There was film, there were pictures, and there was some incidental music as guidelines. And, of course, there were spotting sessions - one or two days when composer and director discussed each individual spot in the film that needed music, from the opening scene through to the to closing credits.

“At some point you want music that shows his innocence in the beginning of his life,” Clarke explains. “There are many points of triumph, and that dictates a specific kind of music. Especially if it’s within a certain period, say the 1960s or 1970s, the music may have to have a certain sound.

"The most important thing is understanding what you want each scene to say. People want to be swept away into whatever universe a film is dealing with, so you have to make sure that the music enhances the story and drives them through.

“After you get through all that stuff, you have to look at the score as a whole and make sure it has an arc, just like the movie. And it has to end, and when it ends, it has to sound like it ends. You look at the film and your mantra is, ‘I’ve got to enhance this cinema.’

"Every film has its problems because you’re dealing with moving pictures. You have to edit and cut to something else, and that presents problems. So another way to look at film music is it’s the glue that takes you from one scene to another but makes you feel like you’re still in one scene.”

The 22 tracks on Halston range from one to almost seven minutes in length, depending on the scene, and were recorded using a combination of live and sampled instruments into Logic and mixed on Pro Tools. “Logic is designed so it’s easy as pie to manipulate,” he says.

“Nothing is set in stone in Logic, and that’s handy for a film composer because you can move everything around. You can write a piece of music and decide, ‘This would sound great in the third act’, copy it, and move it. I mix down to Pro Tools because that’s the format in all the film houses when they’re mixing and dubbing.” Clarke relied on his Alembic basses and an acoustic bass made by French luthier Jean Auray.

“I have a room with probably 20 basses hanging on the wall, and each one does a different thing and has a different sound,” says. “I used two Alembic basses on the soundtrack. One is tuned EADG and the other is ADGC. I also use them live. On tour I use an Ampeg amp, but for the film I used a Fender Rumble. It’s a great amp, a little tiny amp that weighs just a couple of pounds.

"The good thing about this amp is it has a lot of effects. I’ve had it a couple months now, and it’s one of the best things I’ve ever done. I’m not a person with 20 pedals on the ground. When we went out as SMV in 2008 - myself, Marcus Miller, and Victor Wooten - Marcus must have had 15 pedals and Victor had his share too, and I said, ‘Guys, I may have to put some stuff up here just for show!’”

The role of the bass in scoring is precise and subtle, Clarke explains, perhaps more so than audiences realize. “The bass is a real benign instrument in film music,” he says. “What I mean by that is you can put a bass in a scene, and it works sonically because it doesn’t get in the way of anything. It doesn’t get up there with the dialogue and it tends to fit into sound effects.

"All my scores for feature films, especially action pictures, I would say that 70 percent of the directors say, ‘Don’t forget to put some of that bass in there!’ I usually play the bass parts myself, but the last couple of films I hired other bass players. I wanted to be in the studio so that I could see it being done and make sure that it was done right.

“The bass is a very important instrument in film,” he adds. “It can create tension. You can use it to fill out the bottom of the sound. I’ve used it in orchestra, because having an electric bass follow along with the acoustic bass gives it that punch down at the bottom that you usually wouldn’t get from the orchestra. It’s a very powerful instrument.

"Maybe it’s as a bass player that I say this, but there’s some truth to it: the bass is an instrument that brings rhythm and harmony together. Without that, it’s hard to tell what key are we in, what’s the tonal centre. The bassline is very powerful in movies - it just works great.”