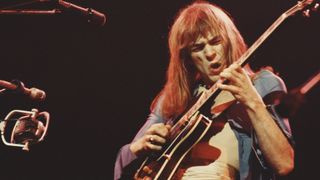 As a child of the '50s stirred by the spirit of rock ’n’ roll, Steve Howe’s rite of passage on the London gig circuit saw him come of age during the swinging '60s.

Later rising from the ashes of flower power to join prog-rock trailblazers Yes in 1970, he then spent the next decade helping to cut a swathe of genre-defining classic albums.

With his new autobiography – All My Yesterdays: The Autobiography Of Steve Howe – set for release later this year, we caught up with the man himself to take a look back at his prolific career as one of rock’s most influential guitarists...

"I wasn’t immune to music before the rock ’n’ roll revolution started. My parents had Les Paul and Mary Ford records on 78, you know, singing How High The Moon and The World Is Waiting For The Sunrise. Amazing recordings. I heard them and they were just part of my life.

"There was also a guy called Tennessee Ernie Ford and he had a couple of great players on his records called Jimmy Bryant and Speedy West. Those records were pretty exciting.

"And then rock ’n’ roll and Chuck Berry came along and I was just thinking, ‘Guitars, guitars, guitars...’ I was moaning at my parents, ‘I want a guitar! I want a guitar!’ and I finally got one for Christmas in 1959, when I was 12 years old. It wasn’t a Framus, but it looked like a Framus f-hole acoustic archtop."

“Chuck Berry was one of the big inspirations, but I liked all the rock ’n’ roll acts. I started to notice that singers often had a good guitarist alongside them. Like Bill Hailey had great guitarists, Ricky Nelson had James Burton, and Elvis Presley had Scotty Moore.

"So I modelled myself on being a guy like that - the guy who stood on stage and just played guitar while the singer did all the shaking about and all the yelling. I thought, ‘I’d like that job,’ and that’s basically what happened.

"Standing there, playing the guitar became my whole life. That’s where it started.”

“The '60s were all about learning for me. For the first couple of years, I used that acoustic archtop. I screwed pickups on it, but it became horrible to play. It wasn’t much good for me for stage work, and after a couple of years I realized if I really wanted to play the guitar, I’d need to get an electric.

"That’s when I bought an Antoria from a friend - I also had an Antoria amp to go with it - but it had a tiny little body. After playing that for a while, I decided I wanted a big guitar, a full-body guitar, and when I was 17, my parents helped me buy the [1964] Gibson ES-175D.

"That was the guitar I loved the shape of and the one I really wanted to play.”

Only my Gibson is good enough

“The signature [Gibson Steve Howe ES-175] was a struggle to get right. After all, the ’64 Gibson ES-175D is a very, very fine guitar and I wanted them to make one as good as that. It was a very nice relationship, but I was just put out by the fact that it was never going to be as good as my ’64.

"But then an original ’64 costs a lot more. When Gibson changed hands, some people got on to me and said, ‘Steve, we want to do this guitar exactly like your ’64,’ and I said, ‘Tell me about it!’ The new guys are sweethearts. I’ve dealt with them and they’re really nice.

“Martin have been amazing, too. I’m delighted to have a great working relationship with them. I have a ’53 00-18 and they brought out the 00-18SH [Steve Howe] based on that, which is a very nice guitar.

"Then they brought out the MC-38 Steve Howe, which is a signature model based on the MC-28 - a guitar I played for many years.”

On the road with vintage guitars

“I play old guitars on stage because they’re worth taking along. It doesn’t hurt that something’s worn in. It’s like an old pair of slippers or an old sofa, you know, they do kind of caress you.

"I have another ’64 ES-175D that I use a lot because my best one stays at home most of the time, mainly because of airlines and stupid rules. You can go to Spain with a guitar, but you can’t come back with that same guitar. Are you nuts?

"I just came over with this guitar and nobody blinked an eyelid, but when I come back it’s, ‘Oh, no, you can’t take that on the plane!’ That’s why my other 175D stays at home.”

“I’ve got some great, great guitars, but what I don’t use now are endless arrays of pedals. I mean, I did the pedalboard thing pretty early on. A lot of people sussed that if you stuck them on a ’board, you didn’t have to set it up every day, they wouldn’t break or fall apart so easily, and you wouldn’t stumble over them.

"I had pedalboards like that for years and years, but now I don’t. It’s just passé to me. These days, my gear is incredibly streamlined. I like to press one button and radically change my sound. I just press a button and it all happens at once. That is heaven, you know.

"Performing is all about preparation. It took me a while to get into programming, but the [Line 6] Helix can do everything I can possibly want and, therefore, that’s all I want to use.

"Line 6 are one of the most accomplished and excellent companies doing electric guitar stuff. The Helix is amazing, and I’ve got nothing bad to say about Line 6. They’re great guys, too.”

“I’ve had so many [pedals] over the years: Big Muffs, Boomerang pedals, different sorts of wah-wahs and stuff from Maestro.

"Most of the stuff I’ve forgotten about, but I have it somewhere, or remnants of it. But the thing people often miss is - and this is important - is that it’s not just about your guitarist, their guitar, the pedals, the amp, the microphone... It’s also about the recording engineer who knows how to record a guitar.

"So I give credit where it’s due, because there’s a lot more to sound. There’s a myriad of different things. The first thing is who’s playing it and what that person thinks while he’s planning to play something. It goes down that long chain and it ends up with a recording engineer sitting in a studio.”

"Nothing can go wrong. They’re great guitars to explore your ideas with. My Les Paul Junior is an absolute beauty. It’s featured a lot on Tales From Topographic Oceans and a fair amount of other things, so it goes out on tour with me. I love it. It’s a great-sounding guitar. Great!”

Venturing out of the shadows

“My first band started out more or less as a pop group called The Syndicats. We’d do what other bands did, which was play chart material in a pub, because that’s all we knew we could do. Then I threw in some other weird tunes that nobody had ever heard before.

"We also did a lot of The Shadows and The Ventures and guitar-featured numbers. But we had a singer, so we had to do some songs. We did a lot of Chuck Berry, and that’s where the R&B side of things took off. Eventually, I wanted to move on, and when The In-Crowd asked me if I wanted to play, I said yes. And that meant I was playing soul - Otis Redding, Wilson Pickett and that kind of stuff.

"That lasted a year or so. We had a hit record and I got to work with a top producer by the name of Joe Meek.”

“Joe Meek was the first producer I had ever worked with in my life. He was complicated - a little crazy at times - but very nice and he was a talent. I wouldn’t say he was a genius like some do, but he was a talent.

"He thought that Phil Spector was stealing his ideas - as opposed to him stealing Phil Spector’s ideas, of course. Maybe. He was a bit difficult to work with at times, but then again a lot of people in the industry are.

“I wanted the producers I worked with to think I was adaptable. If they said to me, ‘Will you play that?’ then I’d say, ‘Oh, yes, I’ll play that.’ I enjoyed having people who were smart and had made thousands of records talking to me about what I should play. And that also educated me about being in a band.

"You really have to listen to somebody when they say, ‘Why don’t you play that? Don’t play this, play that.’ At first, it gets your back up and you might hate them and you feel a little hurt.

"And then you realize, ‘No, it’s a good idea.’ You’ve got to smarten up and not be a bag of emotional nerves.”

The summer of love

"I wrote a few bits and I improvised a lot, and we became a wild touring band. We opened for Pink Floyd, we opened for Jimi Hendrix, we opened for everybody. We were everybody’s opening act, but we didn’t mind that.

"We were climbing the ladder and I was delighted. We had a level of success that we could deal with.

“In 1970, I got a phone call from Chris Squire. He said, ‘Do you want to come down and play Jon [Anderson] and I a tune? We both like your playing. Come down and play with us.’ So we played and it worked. And we made The Yes Album in the countryside - basically, we were back on that kind of hippie thing, really.

"At the time, the ideal thing a band could do was escape to somewhere remote, write songs and record them. And that’s what we did. The 70s were an incredible decade, just years of making all different kinds of music.”

“That 10 years was the most intense and most successful in my career. I wallow in the delight of great albums like Tales From Topographic Oceans and Relayer and Fragile and Close To The Edge. I really don’t have a favorite because I change my mind, but Close To The Edge is a phenomenal collection and was a new style of record.

I mean, it’s astounding. Even I can see that. It gave us an interesting balance, which allowed us to expand our music without any regard for commercialization whatsoever. We cared if people listened to it, but we didn’t want to fit into the box of being a three-and-a-half-minute hit band.

We went in the opposite direction. Sometimes Yes purposely decommercialized music.”

Searching for the sound

"Every album has got the 175 on it somewhere - some more predominantly than others - but it always had a new featured guitar. I was looking for the sound. You know, where’s my Steve Howe sound? What is it? Well, I had it all the time.

"You can’t search for your own sound. You’ve already got it. It’s there. It’s what you sound like.”