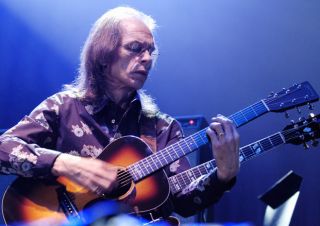 While Steve Howe is perhaps best known for his electric and acoustic guitar contributions to the progressive rock band Yes, the uber-eclectic axman has also played key roles in bands like Asia and GTR and released well over a dozen solo albums.

When Howe joined Yes in 1970, his classical influences, jazz-tinged electric guitar lines and general 'experimental' musical nature had a profound impact on the band’s art-rock sound, resulting in a string of classic '70s-era progressive rock records like The Yes Album, Fragile and Close to the Edge.

Furthermore, live Yes photos from this era show Howe wielding 'unlikely' rock instruments, including a Gibson ES-175 electric and innumerable steel-, nylon- and 12-string acoustic guitars. In doing so, he made many guitarists reconsider their own perceptions of what makes an 'acceptable' rock axe.

Grip your pick between your thumb and index finger and pluck with your middle (m) and ring (a) fingers. Get the D/A pattern together first - downstroke the lowest note, pluck the highest with your ring finger (a) and then downstroke the chord’s middle notes - and pick/pluck the remaining chords in a similar manner.

This figure’s last four bars feature E7 chord fragments shifted up the neck, played with a 'banjo-rolling' technique and punctuated with a strummed E6/9 chord. Howe’s intro to Roundabout (Fragile, 1971), not unlike FIGURE 2, is also performed using hybrid picking and is played in “free time” (with no discernible pulse) for expressive effect. After sounding the signature harmonics, “pre-fret” the third, fifth and seventh frets along the high E string, and pull off.

For Am, G and D/F#, pick the bass notes and pluck the B and G strings with your ring and middle fingers, respectively. Now let’s put the pick aside and focus on Howe’s fingerstyle chops.

Mood for a Day (Fragile, 1971) is a flamenco-influenced (with Celtic overtones) nylon-string solo piece featuring counterpoint moves - upper-register scalar lines played over shifting bass notes - like those in FIGURE 3a. Pluck each bass note with your thumb (p), using your middle and index fingers to sound notes on the top three strings.

FIGURE 3b is reminiscent of another recurring theme in the piece and requires all four fret-hand fingers for high-E string pull- offs while low open strings sound beneath. Our final examples are inspired by the song Masquerade (Union, 1991) and fall in open position, decorating a D chord.

Fret Dsus2 in FIGURE 4a with your index and middle fingers on the G and B strings, respectively; this frees up your other fingers to add hammer-on/ pull-off ornaments and comfortably grab later chords. FIGURE 4b embellishes the open D with sixths intervals (two notes, six scale steps apart), played with hammer-ons and pull-offs and plucked with the index (i) and ring (a) fingers, throughout.