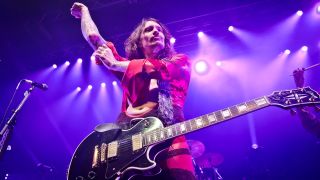 Last summer, The Darkness, Britain’s favorite riff-slinging, '70s-rock-worshipping sons, found themselves onstage in some of the biggest venues in the U.K., opening a series of dates for, of all people, Ed Sheeran. As for how they felt they went over as the support act for the acoustic pop phenom?

“I enjoyed the opportunity to delight, beguile and offend,” says Darkness singer and guitarist Justin Hawkins. “Any sort of reaction was a bonus, because it was just apathy at the beginning of our sets.”

“The crowd started off with their fingers in their ears,” acknowledges guitarist and younger brother to Justin, Dan Hawkins. “But by the end they had their hands in the air. It was a massive success, actually.”

The fact of the matter is that whether or not the Darkness is your cup of English tea, their songs - packed with Queen-like pomp-rock riffs, Thin Lizzy-esque twin guitar harmonies, technicolor solos, playfully falsetto vocals and witty, often absurdist lyrics - are undeniably catchy  and a helluva lot of fun.

Case in point is the new Easter Is Cancelled, which gathers up the Darkness’s key musical components and unleashes them on the world in what is perhaps the band’s most outsized offering yet.

A concept album about “life and death and rebirth,” says Dan, who also produced the record, it opens with a multi-part epic (Rock and Roll Deserves to Die) and then whips through singalong pop-rock (Heart Explodes), acoustic balladry (Deck Chair) and thrash riffery (Heavy Metal Lover), among other styles, before wrapping up with, naturally, another exercise in overblown cock-rock ambition (We Are the Guitar Men).

As for why the Darkness decided now was the time to release a concept record? “When are we supposed to do it?” Justin asks with feigned outrage. “Our 10th album? Maybe it’s early. But some people say it’s too late - ‘Oh, at last! They’re doing it!’”

In the end, perhaps it’s just another way to keep things fresh - not unlike, say, getting out in front of 80,000 Ed Sheeran fans and riffing away on twin Les Pauls cranked through walls of 100-watt Marshalls.

“They probably didn’t anticipate seeing a full band when they bought a ticket,” Justin admits. “But we left as friends. I hope that if we’re in their town, they’ll come see us. We always say, ‘If you can reach just one person…’” Plus, adds Dan, “I don’t think we should be assigned to one genre. We’re a rock band; anyone can appreciate us.”