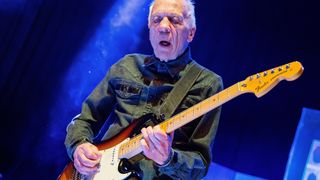 Robin Trower’s Sophomore solo effort, 1974’s Bridge of Sighs, truly ranks among the top albums that every guitarist should hear. While the guitarist’s Jimi Hendrix influences are far from subtle - he used a Strat/Marshall/Uni-Vibe rig nearly identical to Hendrix’s and also played in a power trio format - Trower developed his own signature style by using Jimi’s tonal palette and riffs as a springboard for deeper musical exploration.

That approach is particularly evident on the album’s title cut, which remains as spooky and stunning today as it was when it first bombarded the airwaves in the mid Seventies.

Trower’s use of a Uni-Vibe pedal throughout the song is the facet that most guitarists focus upon, and certainly the song probably wouldn’t have had as much impact as it did without this effect. The Uni-Vibe delivers a wonderfully thick and chewy psychedelic tone that many players have tried and failed to duplicate.

Trower achieved his glorious Uni-Vibe tones by using the Strat’s middle pickup, cranking up the amp’s midrange and cutting the treble and bass. A custom boost/preamp pedal placed in front of the Uni-Vibe also helped thicken the tone by hitting its input with a stronger signal than you’d normally expect.

The swirling Uni-Vibe’s trippy ambience is enhanced by copious amounts of natural room reverb provided by Studio 1 at AIR Studios in London where the song was recorded. Engineer Geoff Emerick placed mics in various parts of the room to capture this sound, and the band played most of the parts live.

One exception to this is the oft-overlooked overdubbed delay riff toward the end of the song. Trower likely used a Maestro Echoplex EP-3 to achieve this effect. To further thicken and enhance Trower’s deep, rich tones, Emerick recorded the guitar parts with generous compression courtesy of the studio’s Neve 2254 compressors.

TONE TIP: Employ the Marshall’s gain control sparingly and crank up the master volume instead to achieve just a hint of overdrive. Place the Soul Food in front of the Uni-Vibe pedal and hit its front end with a generous amount of clean boost.