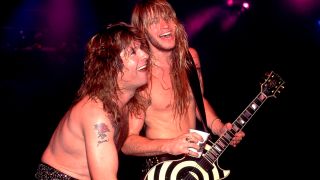 Ozzy Osbourne’s 1988 album, No Rest for the Wicked, may have introduced Zakk Wylde as the Prince of Darkness’s new guitarist, but his 1991 follow-up studio album, No More Tears, is the record that established Wylde as a bona fide guitar hero.

The title cut, which was released as the album’s first single, is an epic track that proved that Wylde had his own distinct voice and truly deserved to follow in the footsteps of his predecessors Tony Iommi, Randy Rhoads and Jake E. Lee.

During the early '90s, mammoth refrigerator-sized racks were all the rage with metal and hard rock guitarists, but Wylde relied on a much simpler, comparatively primitive rig to lay down his huge tones.

For No More Tears, he eschewed the wah and Rotovibe, using just the Boss pedals and Marshalls to generate the song’s bone-crushing crunch.

Several key elements of Wylde’s rhythm tones on the song include boosting the bass and treble almost all the way while still retaining a decent amount of midrange to provide ample definition and body for individual lines, the tighter attack and extended treble and bass response courtesy of the Marshalls’ 6550 tubes, heavy-gauge strings on the low E, A and D, and the extra output boost from the EMG pickups and Boss SD-1.

The chorus pedal remains on throughout the song as well, to provide extra body and just a hint of modulation. The delay effect at the end of Wylde’s solo was added during mixing using a digital delay unit.

TONE TIP: Use the Marshall’s Ultra Gain (Red) channel but keep the Gain control relatively low, using the SD-1 to generate most of the distorted tone.