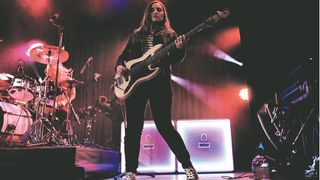 Vicky Warwick has been touring the world, holding down the bottom-end for such artists as Charli XCX, Gabrielle Aplin and Josh Kumra, among others, while dividing her time between London and New York - though lately she’s set her sights on the L.A. scene.

“I was touring so much with Charli, and we were in America a lot - and I just really, really enjoyed it,” the Brit bassist tells us. “There’s a certain element of not wanting to go home - I had always wanted to live in New York: it was a dream to be there. I was spending a lot of days off there, and I had a friend from school who was living out there so it started to feel like home.

"Charli had cancelled a tour and I just went to New York for six weeks and that was it. It seems that the pop world is in L.A., though, so I’m going to spend some more time here... Isn’t it silly, we chase work round the world!”

Well, it might seem silly - but it’s also very exciting. Vicky goes on to talk about the benefits of a potential new life in La La Land.

“That’s where it’s all going down. It’s a beautiful place, everyone is friendly, but the thing with L.A. is that it has a reputation that people aren’t completely genuine, whereas in New York, the musicians I’ve met have been really helpful. It’s nice to meet people who are friends of friends: the beautiful thing about touring is that wherever I go, there’s always a friend in that city.”

So what’s next for Vicky? “I’m releasing my own music, so that’s a big thing I’m trying to do more this year under the name Ainslie. I work with an artist called Tomi on Sony.”

And what gear is she rocking these days? “I use Fender Mustangs - they do a short-scale Jazz in the Modern Player range which they released for, like, a minute. I’ve got four of them, two in an A rig and two in a B rig; two in Europe and the other two in America.

"I love playing Mustangs, but the Jazz has a P/J pickup configuration so it sounds a little bit more modern, with a bit more punch. I use DR Strings on my Squier Jaguar basses: they’ve got really thin strings and they’re great to play, with a pretty low action too.”

Vicky has recently been gracing Aguilar advertisements, too.

“I was introduced to them at one of the London Bass Guitar Shows and they’ve been so great. I use their heads, cabs and pickups - which is great because they’re based in New York and I can just pop over to their artist loft.”

Vicky Warwick's solo EP under the alias Ainslie, Grow, is out now.