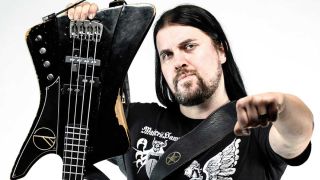 If you’ve missed out on the pleasures of Scandinavian extreme metal, you might be surprised to learn just how important a presence it has in the world of unsociably loud music.

Just as the terms ‘West Coast psychedelia’ or ‘British modern jazz’ refer to a particular era and flavor of sounds, and purists would be horrified if you applied them incorrectly, the subgenres of Norwegian black metal and Swedish death metal have their own specific connotations.

If you’re oblivious to these distinctions and would rather just read about bass, that’s fine and dandy, and leads us to the subject of Victor Brandt, a highly affable Swedish gentleman to whom the preceding paragraph is particularly relevant.

His career has covered spells in major acts from both the black and death metal worlds, a surprisingly infrequent crossover considering the similar DNA of both sounds. Brandt is currently a member of Dimmu Borgir, superstars of Norwegian BM, and recalls how simple it was to switch genres and countries, both musically and linguistically.

“I’ve been in Dimmu Borgir for around three years, and before that I was in Entombed AD, the Swedish band,” he explains. “Switching from a Swedish to a Norwegian band was easy. In fact, I’ve done it before – I was in Satyricon for two years and lived in Norway at the time. The languages are quite similar, maybe 75 percent identical, so they ask me a question in Norwegian and I’ll reply in Swedish.”

Asked about his early influences on bass, he defaults to the standard metal canon: “Lemmy, of course, and Geezer Butler. They weren’t the most technical bass players but I listen to their songs, and to their bands, over and over.”

However, Brandt also departs from the usual metal influences, adding: “I also enjoyed the more technical bass players – Jaco Pastorius, Stanley Clarke, Victor Wooten, and so on. I went to a Swedish music school, where I chose to do a course in African-American music, which focused on blues, jazz and soul.”

His origins were hardly conducive to future stage stardom, he explains. “I’m from a really small village of 800 people from the north of Sweden. I played guitar and bass when I started out, but bass felt easier and more natural. Where I lived you could choose to play music, play sports or party – those were literally my only three options – and music was what I chose.

“I didn’t have any other interests at all. It was a blessing and a curse, I guess, but it helped me to stay focused. Unfortunately, when I made that choice, there was only one other guy in the whole village who was a musician.”

Early tours taught Brandt the ropes. “I played in a bunch of small bands that made cassette demos. At one point I toured with a crust-punk band. It was tough – we played in squats in the middle of winter – but I learned a lot from it. You learn not to take anything for granted. I’m really grateful for that experience.”

In that light, Satyricon – then enjoying a heightened profile – was a whole new environment for Brandt when he joined them in 2007. “It was a big step up, with a crew and a tourbus and dates in Mexico,” he says. “I played bass on an EP, My Skin Is Cold, and their album The Age Of Nero. I got a Norwegian gold album for that, which was so cool.”

Quitting Satyricon for pastures new in 2009, Brandt made a sideways move to a notable bunch of Swedes, simply through lucky timing.

“I bumped into LG Petrov from Entombed when I was in a line for food at an airport,” he remembers. “I was looking for a full-time band, and I was a big Entombed fan, so I sent him a message on Myspace and let him know that I was available if he ever needed a session bassist.

“I was in luck because LG needed a guy for the forthcoming tour as their current bassist was about to become a father. We played Summer Breeze and Bloodstock, and we had no time to rehearse, apart from a quick unplugged session in the hotel room, so the first time we played together was on stage. It was a bit nerve-wracking, but it worked.

“I played with Entombed for nine years. When the offer from Dimmu came along, I really wanted LG’s blessing to take the job, so I asked him what he thought – and he said ‘Go for it!’”

Over the years, has Brandt been required to adapt his bass playing to different bands?

“At one point, Satyricon asked me to follow the kick drums, which could be real fast at times, but that was the only time that I had to take a different approach between one band and another. I basically use the same approach – and also the same sound, I guess. I’ve been happily surprised that, even with so much going in Dimmu’s music, which is highly symphonic, I could squeeze in some nice bass parts.”

With this amount of high-profile work on his resume, it’s little surprise that Brandt is toting some tasty bass gear.

“My main bass is my new signature Sandberg, which was just announced back in February,” he says with justifiable pride. “I was with Warwick for 14 years, and they make great basses and they’re a great company, but I got an offer from Sandberg for a signature model – and that’s a dream come true.”

He adds: “It’s their Forty-Eight model with a reversed headstock and a classic-rock pickup setup, with passive P and J pickups. They have a new preamp, too, which has bass, high-mid and low-mid pots, but no treble pot, which helps to cut through the mix. Everything is black, with an ebony fretboard.

“Mine is a four-string but you can order a five-string version if you want. It has my signature branded on the back of the headstock and Dimmu Borgir runes on the pickguard as an optional extra. There’s an all-black one and an aged-finish one.”

You’ll notice an especially heavy-metal addition to the signature Brandt bass if you look carefully, he chuckles. “The J pickup is in the shape of an inverted cross! The two pieces on the side that make the cross shape aren’t actually part of the pickup, it’s just that the pickup cover is shaped that way.” His other gear is state of the art, too.

“We use Jerry Harvey Audio in-ear monitors, Richter straps, DR strings, Klotz cables, and Darkglass pedals and amps – they make you sound good effortlessly. I use a Klotz passive DI, a Darkglass B7K as a DI and a DSM Noisemaker as a cabinet simulator – so I’m using three XLR cables from the pedalboard.

"Maybe it’s overkill to have both in-ears and the amp on stage, but it’s really nice to have the air blowing out of the amp.”

Many modern bass players make their living with several bands: What advice does Brandt have for us about adapting our playing to suit?

“Well, I have my personal preference that I start with, and if I feel that I should make some changes to fit in, I’ll do that. If I’m playing in a band that has existed for many years, of course I’m very open to their preferences.

“I’ve been fortunate enough to play with very cool people in my career, and they want everyone in the band to feel comfortable so that they can do their best.”