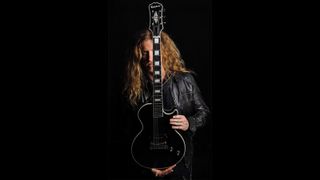 Jared James Nichols has had a connection to the Les Paul guitar for, quite literally, his entire life. The rising blues-rock star was born and raised in Paul’s hometown of Waukesha, Wisconsin. “I started playing guitar at 15 and that shape was already iconic in my mind,” he says.

Like Paul, the now 30-year-old Nichols has already in his short career carved out a singular path - in his case, as a heavy blues shredder with a unique and aggressive finger-style attack. And he’s done it with his own customized instrument.

Early on, to complement his unusual playing style he began modding his Les Paul Custom, first by ripping out the neck pickup (“I never used it because I played with my fingers, so I was already getting a pretty dark sound,” he explains) and then adding electronics and hardware like a Seymour Duncan P-90 and a wraparound tailpiece. “I was taking it back to being a simpler, more direct instrument,” he says.

Now, that instrument is available as the Epiphone Old Glory Les Paul Custom Outfit. Why Old Glory? “The sound of my guitar hearkens back to all the blues and rock music I worshipped as a kid, and that I still worship,” he says. True to Nichols’ preferences, the new Epiphone boasts a single Seymour Duncan P-90 and a wraparound lightning bar bridge.

“When you have the wrap tail with a P-90, the way it sounds and the way it resonates, it just feels more like a hot rod to me,” Nichols says. There’s also a single volume and tone control, a “real thick baseball-bat neck with jumbo frets” and, like Nichols’ original modded Les Paul Custom, a plate engraved with “Blues Power” just below the bridge.

“Jared was looking for a flamethrower of a guitar,” says Epiphone product manager Aljon Go. “For us it was an opportunity to do a single-pickup Les Paul, which Epiphone hasn’t done very often.”

Adds Nichols, “I love that it’s an attainable guitar that people can pick up and be inspired by.” And perhaps no one more so than the artist himself. “It has a simple layout, but I look at this guitar as a wide-open pallet of colors and tones,” he says of Old Glory. “It’s been my main guitar since the day I got it - it came out of the box and went straight to the stage. Epiphone just nailed it.”