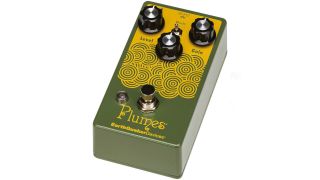 The Tube Screamer is easily one of the most popular and heavily copied circuits in the overdrive pedal industry, so chances are pretty good that most players either already have an original, a modded version or a clone of some sort in their rig whether they know it or not.

The Plumes Small Signal Shredder from EarthQuaker Devices is the latest stomp box inspired by Screamer-style overdrives, but they’ve radically reimagined it with a new circuit that replaces the 4558 IC and BJT transistor buffers with JFET operational amplifiers to provide improved tone and performance, with more natural tone and organic dynamics, enhanced treble clarity and depth, lower noise and boosted midrange that hits the sweet spot.

In addition to overall tonal improvements, Plumes offers a much more useful tone control and three different clipping modes that will make even the industry’s best Screamer clones green with envy.

The Plumes pedal provides the standard three-knob overdrive control configuration - Level, Gain and Tone - plus a mini toggle switch for selecting the three available clipping modes. Mode 1 is symmetrical clipping that provides the pedal’s most aggressive crunch; Mode 2 is a clean boost and Mode 3 is asymmetrical silicon diode clipping similar to the original Screamer, but with more output and clarity.

A common complaint about Screamer-style overdrives is that they sometimes sound a bit over-processed. That’s not a problem with Plumes, as its overdrive is very organic and natural-sounding, and provides the dynamic give and take of plugging directly into an overdriven tube amp. While there is a notable (and intentional) midrange boost, it hits an ideal sweet spot that makes the guitar’s tone full, rich and sweet with a vocal-like singing quality instead of a nasal honk.

Mode 1 has the character of a modded Plexi amp, while Mode 2 delivers true clean boost with enhanced mids and Mode 3 provides classic 'green' overdrive with less compression and more dynamic string zing. The tone control is useful across its entire range. Turn it counter-clockwise for bigger bass or clockwise to boost treble without making the tone flabby or wimpy.

● The Tone control provides a wider variety of EQ than that of similar overdrive pedals while remaining musical and useful across its entire range.

THE BOTTOM LINE: The EarthQuaker Plumes provides outstanding dynamic, organic and natural-sounding overdrive tones that will make your guitar scream, while its $99 price will make other stompbox companies scream.