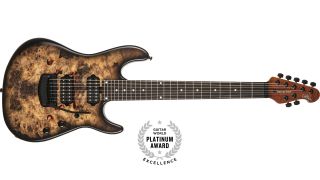 Over the last 20 years, the 7-string guitar transitioned from a novelty to a new norm embraced by dozens of the electric guitar world’s most talented and innovative virtuosos. Jason Richardson, formerly of Born of Osiris and Chelsea Grin, and now a solo artist and member of All That Remains, is one of the most impressive seven-string specialists to come along over the last decade, so it makes perfect sense that he caught Ernie Ball Music Man’s attention and was invited to join the company’s esteemed roster of signature model collaborators.

Whereas most previous Music Man signature models from the Albert Lee and Steve Morse to the Valentine and St. Vincent featured entirely new designs, the Ernie Ball Music Man Jason Richardson 7 String Cutlass is part of a new approach for Music Man artist guitars where up-and-coming players are putting their own touches on existing models (like the Hunter Hayes Cutlass and Dustin Kensrue StingRay).

This means the Jason Richardson 7 String Cutlass isn’t simply a Cutlass model with a seventh string added on, but rather a notably modified design with several unique features built to Richardson’s specifications.

Whereas the standard Cutlass model features an alder body, the Jason Richardson 7 String Cutlass immediately catches the eye with its stunningly figured buckeye burl top laminated to the lightweight alder body. Other unique details include a deeper extended cutaway and distinctively contoured lower horn that provides better, unrestricted access to the uppermost frets without shifting the fretting hand positioning.

Another unique feature is the Music Man custom seven-string humbucking pickups with ceramic magnets. The pickups are wired to a three-position pickup selector switch that provides neck humbucking, bridge humbucking and both in a single-coil/parallel configuration. The neck and bridge humbuckers can be coil tapped via the push/push master tone control knob, while the master volume knob’s push/push function engages an active preamp with Silent Circuit that provides up to 20dB of boost.

Compared to the Music Man Petrucci seven-string models’ sleek supercar-style aesthetics and performance, the Jason Richardson 7 String Cutlass is a little more like a modernized muscle car, with a louder, brasher and more aggressive stance. The pickups provide massive brute-force crunch through a high-gain amp with impressive clarity, definition and full body when performing blazing runs. The overall tone is bright but not harsh and the bass strings deliver outstanding percussive punch that is drum tight with no excess flabbiness. Being able to instantly switch from humbucking to true single-coil tones via the pickup selector switch also provides a huge performance advantage.

Despite having slightly larger dimensions than a standard six-string solidbody, the Jason Richardson 7 String Cutlass is impressively light and its body contours provide similar playing comfort and feel to a standard six-string. The neck profile is slim without being overly flat, and its rounded profile fits in the fretting hand with a feel similar to a six-string neck as well, making this model an ideal choice for six-string players who want to make the transition to a seven-string without having to adapt their playing style too much.

Like all Music Man guitars, the construction quality and attention to detail is impeccable. The Jason Richardson 7 String Cutlass joins Music Man’s various seven-string John Petrucci models as some of the best seven-string guitars available today, so if you’re serious about playing seven-string guitar and want to cut to the chase by immediately selecting an instrument with outstanding tone and playability it’s a highly worthy choice.

• The figured buckeye burl top looks stunning and also enhances the percussive attack and definition of the alder body.

• The master volume knob’s push/push function engages an active preamp that provides up to 20dB of boost.