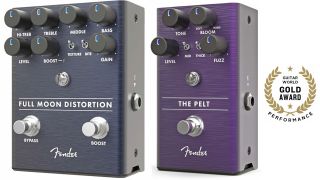 I usually anticipate writing a review of a new distortion or fuzz pedal the way a restaurant reviewer probably looks forward to tasting a new hamburger or pizza. Almost everyone makes them, and most are usually good, but many offer little more than slight, subtle variations that make one stand out from another. However, on a few rare occasions a new product comes along that completely renews my faith in just how great and truly different a new distortion or fuzz pedal can be. Fender has achieved exactly that with two new pedals: the Full Moon Distortion and a fuzz box called The Pelt.

FEATURES The Fender Full Moon Distortion is a high-gain distortion stomp box with a versatile EQ section and a separate boost function. Like Fender’s other new pedals introduced recently, it’s housed in an exceptionally sturdy case with an anodized brushed aluminum face plate and features a very convenient pivoting spring-loaded battery compartment door on the front edge facing the player. Controls consist of high treble, treble, middle and bass EQ knobs, level, boost and gain knobs, a pair of mini toggle switches for texture and bite settings and individual bypass and boost footswitches. A large blue LED indicates effect or bypass mode, and a smaller blue LED illuminates when the boost mode is engaged. The control knobs can also be set to illuminate via the LED switch on the back.

The Pelt is a classic square-wave silicon transistor fuzz pedal that offers more control over tone and texture than the typical vintage-style fuzz box. It’s housed in a case that’s about an inch narrower than the Full Moon Distortion but otherwise shares the same features like the spring-loaded battery compartment door and LED switch for illuminating the control knobs. The Pelt’s controls include level, tone, bloom and fuzz knobs, mid and thick mini toggle switches and a single bypass footswitch. Both pedals operate with either a 9-volt battery or a standard 9-volt center negative DC power adapter or power source.

PERFORMANCE The Full Moon Distortion’s manual states that it is “engineered to deliver heavy distortion without losing clarity,” and truer words have never been written. While most high-gain distortion pedals also bring along a rather generous helping of compression, the Full Moon’s tones seem to actually enhance dynamic response and articulation. String attack can be incredibly percussive and aggressive, especially with the bite function engaged, which enables each pick stroke to cause notes to explode from the fretboard and deliver a powerful blow to the solar plexus like a Bruce Lee roundhouse kick. At the same time, notes sustain with a gorgeous bloom as the body of each note becomes more voluptuous and rounder. The EQ controls are very interactive and provide useful, musical sonic range no matter how extreme the setting. Even with the level, gain and boost controls maxed, the tone never gets fizzy or squishy. Instead it becomes more ballsy and dynamic — perfect for ensuring that your guitar never gets lost in the mix again.

The Pelt delivers wonderfully raspy and buzzy fuzz with tons of fat body that somehow also manages to maintain clarity and definition. The magic here lies in the bloom knob, which sweeps the attack from soft to hard, and the thick and mid switches, which allow users to tweak the overall frequencies for added fatness or sharper precision. The full-on fuzz effects sound best with single notes or fifths, but the fuzz can be tamed for those who prefer to play more complex chords with more clarity. The Pelt’s harmonics are as rich as Warren Buffet on dividend day.

● The Pelt’s bloom knob and thick and mid switches deliver a wide variety of fuzz tones, from big and fat to crisp and precise.