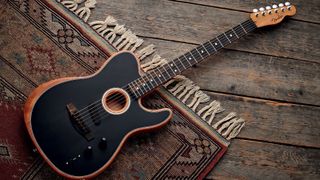 Fender, in their endless pursuit of innovation, are continually tinkering with their most popular guitars, amps and effects - all of which has led to constant demand for their products from top to bottom. Every so often, they take a chance and launch something peculiar, which may not necessarily be revolutionary, but can be considered groundbreaking.

I won’t waste the space to point out the specifics, but I’ll disclose that the Fender American Acoustasonic Telecaster was initially puzzling to me, but the longer I’ve played it, the more enamored I’ve become with it. And it’s why I can honestly say it would be a shame to cynically dismiss it as an overindulgent hybrid of an acoustic-electric, because it’s so much more - a truly visionary instrument delivered in one of Fender’s most iconic body shapes.

The Acoustasonic Telecaster is - first and foremost - American made, being built in Fender’s Corona, California, factory. It features a unique hollow body design with transverse bracing, a bolt-on mahogany neck with a contoured neck heel, a dark ebony fingerboard (my example had gorgeous caramel streaks across it) with 22 narrow tall frets, a laser-etched Fender logo and a GraphTech TUSQ nut.

The precise contours of its mahogany body have soft-rolled edges and a comfortable forearm bevel that seamlessly flows into the solid Sitka spruce top, capping off a novel Tele-shaped visage outlined by its binding and understated rosette. The rounded mahogany sound port is part of Fender’s patented String Instrument Resonant System (SIRS), which contributes to the guitar’s lively projection and fuller voice despite having Telecaster dimensions.

Even though the guitar has a poly-satin matte finish, it has a very natural and pleasant wood feel throughout. But what clearly makes the Acoustasonic a powerhouse instrument is the Fender and Fishman-designed Acoustic Engine - a trinity of digital and analog firepower that consists of a Fishman under-saddle transducer, Fishman Acoustasonic Enhancer and Fender’s Acoustasonic noiseless N4 magnetic pickup, wired to emulate 10 modeled body styles and tone wood combinations, all of which are accessed via the five-way voicing blade switch and blended with the Mod knob and master volume.

The input jack includes a mini USB input to charge the Acoustasonic’s lithium-ion battery, with a battery indicator that flashes red when it’s time to recharge.

As expected, most electric guitarists will feel right at home with the Acoustasonic’s taut yet springy playability on its super-flat 12-inch fingerboard radius and modern slim 'C' neck that’s strung with light gauge acoustic strings. While it won’t replace your favorite electric guitar or traditional acoustic, it sits somewhere between, most likely as a utility guitar, but I can easily see it as my main instrument for a wide variety of musical performances.

Admittedly, I can’t wait to see the early high-profile adopters of the Acoustasonic. Strumming unplugged, the guitar sounds firm with a moderate output, but once plugged in to an acoustic amp or PA system, there is an undeniable wow factor with the Acoustasonic. Instantly, the sound is larger than life and stunning in how full-bodied it becomes with no feedback. Depending on which acoustic voice is selected, it sounds as good as, or dare I say, better than the electronics on most blue-chip-brand acoustics.

The imaged voice combinations are multiple variations of Sitka and Engelmann spruce tops, Brazilian rosewood, maple parlor body, dreadnought, rosewood auditorium body acoustics and much more, and all are convincingly good to great. Using the Mod knob to blend the voices generates incredible detail for fine-tuning your preferred acoustic tone. The N4 bridge pickup adds a nice snarl and midrange bump if you’re using it like an electric, and twisting the Mod knob to roll between clean or fat tones really makes this guitar an all-in-one solution.

• The Acoustasonic Telecaster replicates 10 different body styles and tone wood combinations that can be played solo or blended via the Mod Knob to create infinite combinations of jaw-dropping acoustic sounds.

• The Acoustasonic noiseless magnetic pickup ups the ante on the Acoustasonic’s versatility by injecting electric guitar tone that can be blended with the acoustic voices or used on its own.

THE BOTTOM LINE: The Fender American Acoustasonic Telecaster is a major innovation for its curated collection of acoustic and electric tones that provide endless combinations, along with easy playability and light weight, all of which make it a new benchmark in acoustic-electric design.