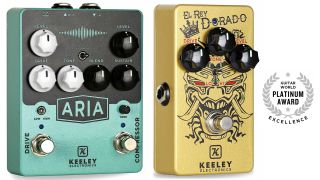 There are two things guitarists can never have enough of: money and distortion pedals. (Okay, actually three things, but this is a family publication!) Robert Keeley is making strong overtures to our hearts and wallets with two new pedals that offer different flavors of distortion: the Aria Compressor + Overdrive and the mysteriously named El Rey Dorado. If you love distortion as much as we do, you’ll want both of these boxes on your pedalboard.

FEATURES The El Rey Dorado (Spanish for “the golden king” or is that “the king mahi-mahi”?) hints at its tonal character with its gold and black color scheme. This pedal is designed to provide pure, unadulterated late-Sixties Plexi tone, specifically of the JTM 45/100 variety. Its control complement is straightforward, consisting of the requisite drive, tone and level knobs and the added bonus of a lo/hi “power” mini toggle switch.

The Aria pedal is quite literally two pedals in one — users can freely adjust the signal chain order of the effects (overdrive before compression and vice versa) or even use TRS cables to insert a different pedal effect in between the two. Like the El Rey, the overdrive section’s controls consist of level, drive and tone knobs along with a low/high mini toggle switch for selecting low or high gain. The compressor section has its own level, blend and sustain controls plus a mini rotary tone knob for dialing in brightness. Each section has its own on/off footswitch, and the pedal features a mini FX Order toggle for placing one effect or the other first in the signal chain.

PERFORMANCE The El Rey Dorado’s name and Mayan demon graphics may be confusing for a pedal intended to duplicate a certain British flavor from the swinging Sixties, but you’ll totally get it when you hear it. Let’s just say it puts so much hair on your tone that you’ll think your amp grew a long, luxurious beard. The El Rey’s tones are gloriously gnarly with rich upper midrange harmonics but also impressive low-end wallop. In other words, mucho cajones, amigo!

The Aria is flat out awesome. You get a pro-quality compressor that completely preserves attack and adds impressive body and sustain without changing the guitar’s tonal character. Add to that an overdrive that’s worth the entire price of admission thanks to its rich harmonics, crisp definition and tone profile that makes a guitar sound its best. By placing compression before overdrive, users can make every note clear as a bell and dial in pro studio quality tones for live performance.

THE BOTTOM LINE: The Keeley El Rey Dorado nails coveted Plexi tones for less than the cost of a replacement knob for the Sixties original, while the Aria pedal delivers top-notch compression and overdrive effects to deliver tone with the elusive polish of a finished studio recording