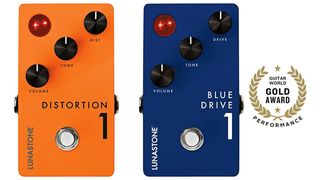 If you haven’t heard about or tried it already, Lunastone’s TrueOverDrive 1 is an exceptional overdrive pedal made in Denmark by Lunastone’s chief designer and founder, Steen Grøntved. What makes it inherently unique is its original circuit design that produces a far more tube-like feel and natural cranked-amplifier crunch. And that keen approach has been the modus operandi for all Lunastone pedals. Adding to the company’s pedal roster of what I like to call “artisanal dirt,” Lunastone launched four new flavors of gain with Red Fuzz 1, Smooth Drive 1, Blue Drive 1 and Distortion 1 — the latter two of which I’m reviewing here, and I can assure you that you won’t need a refined palate to fully enjoy both offerings.

The Blues Drive 1 and Distortion 1 have an identical austere symmetry in their looks — “Scandinavian Stark,” if I were to name it — with the volume, tone and drive/dist controls arranged diagonally to maximize the clean lines of their topography. The bright red LED is perfectly proportioned in size to the controls, making it very easy to see when it’s on (but if you can’t hear when it’s on, well, we’ll need to have a talk). Both pedals feature true bypass operation and a rugged Soft Touch footswitch.

The Blues Drive 1 is the most subtle of the two in its overdriven character. In fact, the gain doesn’t kick in until 3/4 of the way on the drive control, but don’t get me wrong — that’s the absolute beauty of this pedal. I find it’s meant to enhance and boost the clean tone of your amp for more gritty bite, or adds just enough drive and sustain if you’re pairing it with another gain pedal or pushing an amplifier. It’s wonderfully transparent, where notes linger before naturally dying off. On the other end of the spectrum, the Distortion 1 is very much a classic distortion pedal that has a buzzy grind and tons of fuzzy hair — pure and simple, it’s organic molten distortion. Goosing the tone control adds more midrange but I tend to like the tone control backed off for darker Sabbath-style sludge.