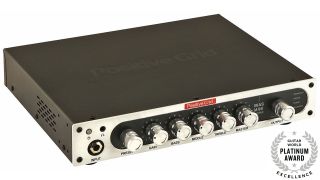 We are living in very unusual times indeed. Amazon is now opening brick-and-mortar retail stores. Clunky athletic “dad” shoes are fashionable. App developers are making hardware products. Actually, the latter isn’t that unusual at all, as the worlds of software and hardware have co-mingled for quite some time now. Today, all but the most fanatical purist guitarists have accepted guitar-and music-based apps. As a result, the need for stage-worthy hardware that is better suited to live performance than computers and mobile devices has increased significantly, and so have the selection of hardware products that support those applications.

Positive Grid recently entered the hardware world with the introduction of their acclaimed Bias Head. The success of that flagship model has led to a more affordable version called Bias Mini Guitar, which features a more streamlined control panel and a built-in 300-watt power amp instead of a 600-watt amp. Whether you want to ditch a bulky guitar rig, clean out a basement full of amps (and eliminate costly maintenance such as replacing tubes and worn-out capacitors) or expand your tonal palette without breaking the bank, Bias Mini Guitar promises to be the perfect bridge between the versatility of today’s amp apps and the reliability and ruggedness of dedicated guitar hardware.

FEATURES The Bias Mini Guitar amp head hardware unit is indeed mini, measuring a little more than one inch larger in width and height than a 10.5-inch iPad Pro and about the same depth as a standard stomp box. The front panel features only seven control knobs: Preset, Gain, Bass, Middle, Treble, Master and Output, with the latter also featuring a 13-segment level display surrounding the knob and indicators for the current activated output: speaker out, line out, FX send or headphone out. There’s also a ¼-inch guitar input jack, 1/8-inch headphone output jack and power on/off button.

While Bias Mini Guitar is ready to play out of the box with 16 onboard custom amplifier presets, nine built-in reverb effects and a built-in noise gate, its full tonal power is unleashed when the unit is linked with the Bias Amp 2 Pro desktop software included with the product. The hardware also can be controlled with the Bias Amp 2 mobile app loaded on an iPad or iPhone. Both Bias Amp 2 software packages provide access to an incredible variety of custom amps in the ToneCloud library and optional Amp Packs or build your own custom amps from the ground up, from the preamp and power amp through the tone stack and transformer. Bias Amp 2 also includes an Amp Match function that duplicates the tone of your own (or borrowed or rented) amps or an audio file. You also can download thousands of Amp Match presets from the Bias ToneCloud.

PERFORMANCE If you’re already familiar with the Bias Amp app, you know how incredibly rich and detailed their virtual amps are. The Bias Mini Guitar amp head is the perfect bridge between Bias Amp 2’s pristine virtual world and the gritty, less-than-ideal real world of performing on stage, providing a solid, gig-worthy means for amplifying those sounds through a speaker cabinet with plenty of volume. All of the essentials for tweaking your gain, volume level and EQ settings on stage are at your fingertips on the front panel, which is much more efficient and problem-free than trying to make adjustments on an iPhone, iPad or laptop computer during the heat of a gig.

The sound quality of the Bias Mini Guitar’s power amp is crystal clean and noise-free, allowing the Bias Amp 2 amps to shine at their finest. Up to 16 presets are accessible via the Preset knob, and the optional Bias Footswitch allows users to assign and control any four presets. A MIDI controller can also be used to access additional presets, and BIAS Amp 2 for iPhone and iPad is available for free download.

● A built-in 300-watt amplifier provides more than ample volume output for live performances ● Up to 16 presets can be selected via the front panel’s Preset control, or four presets can be assigned to the optional Bias Footswitch controller ● Bias Amp 2 Pro desktop software for Mac or PC is included, which provides access to a massive library of amps and allows users to build their own custom amps ● Essential controls for EQ, volume and gain are located on the front panel, allowing players to conveniently make necessary adjustments for any live playing environment or situation ●

THE BOTTOM LINE Bias Mini Guitar may be tiny, but it’s a powerhouse that can confidently replace an entire room of amps, making it perfect for performers who want to streamline their rigs without making any compromises