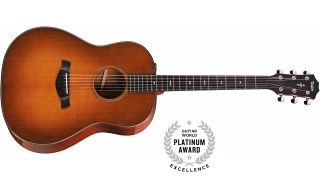 Many guitarists consider the square-shouldered dreadnought the ultimate acoustic flattop steel-string guitar. It’s certainly remained the most popular acoustic since its introduction in the Thirties. But while the model has more than its fair share of fans, its popularity seems to be based on its sound being more familiar than flawless. Players with discriminating ears who have played dreadnoughts on stage or in the studio know what I’m talking about. The booming bass that partially defines a dreadnought’s distinctive voice can sound glorious in some instances, but too often it dominates at the expense of treble and midrange frequencies that struggle to be heard, particularly when chords are strummed.

With the introduction of their new Grand Pacific models, Taylor offers a completely new flattop guitar design that tames the dreadnought’s bass boom while still retaining the warm tonal character, sustain, projection and power that players desire. The Grand Pacific is not a refinement of previous designs, but rather an entirely new guitar designed from the ground up with a unique body shape coupled with the V-Class bracing pattern innovated by Taylor master guitar designer Andy Powers. We took a look at two of Taylor’s top-end Grand Pacific models — the Builder’s Edition 717 with a torrefied spruce top and rosewood back and sides and the Builder’s Edition 517e with a torrefied spruce top and mahogany back and sides. Taylor also offers the Grand Pacific 317e in spruce and sapele for players seeking a more affordable model.

FEATURES The Grand Pacific model has a gorgeously curvaceous round-shoulder non-cutaway body that measures 20 inches long, 16 inches wide and 4 5/8 inches deep. Neck features include a 25 ½-inch scale length, 1 ¾-inch nut width, “compound carve” neck (a neck shape that subtly transitions from a slight V by the nut to a more rounded C at the heel end profile) and a West African Ebony fretboard with 20 medium frets and “arrowheads” inlays in grained ivoroid (517e) or mother of pearl (717). With the exception of 517’s Tropical Mahogany back and sides and grained ivo-roid inlays compared to the 717s Indian Rosewood back and sides and mother of pearl inlays, both models otherwise have identical features, including a Silent Satin finish on the body, satin finish on the neck, Sapele body binding, West African Ebony fretboard binding, Taylor nickel tuners, black graphite nut, Micarta saddle and West African Ebony bridge pins. It’s also noteworthy that Taylor has introduced a suite of player-friendly “contouring” features such as a rounded, ridge-less heel, rolled fretboard edges, chamfered body edges and newly refined “Curve Wing” bridge, all of which are exclusive to the Builder’s Edition acoustics.

The 517e that Taylor sent for review also featured the optional WHB (Wild Honey Burst) finish on the top that attractively complimented the model’s Blackwood Stain finished back, sides and neck. The “e” designation also means that the 517e includes Taylor’s Expression System 2 built-in electronics. The WHB finish and electronics are optionally available for the 717, and the 517 is also optionally available with a natural-finish top and no electronics.

PERFORMANCE When strumming a chord on either Grand Pacific model, players are instantly greeted by the distinctive warm and full sound of a traditional dreadnought but with enhanced clarity across the entire frequency range. The strings can be strummed quite aggressively without overdriving the top, and the guitar projects impressive volume output even when individual notes are picked more delicately. Like a traditional dreadnought, the notes blend and overlap to form a more cohesive whole (sort of like an organ) whereas most modern acoustic designs tend to give each note its own distinct space and definition (like a piano).

The 717 with its Indian Rosewood back and sides provides enhanced presence and upper midrange sparkle, while the 517e with its Tropical Mahogany back and sides delivers an overall warmer, rounder tone with more pronounced lower midrange emphasis. The treble on both is rich and bell-like, with alluring body that remains even when strumming chords. The bass is big and full but not overwhelming. Both Grand Pacific models provide the low-end punch that bluegrass and rock rhythm players desire without needing aggressive high-pass filtering to sound presentable on stage or in the studio.

The strength of the Grand Pacific’s inherent tone really becomes evident when amplifying the guitar via the Expression System 2 electronics. I found that the 517e sounded best with the controls at the center/flat settings, and no additional shaping or enhancement was necessary. If you love the tone of a traditional dreadnought, chances are you’ll agree that, with the Grand Pacific, no further improvements are necessary.

● The Builder’s Edition 717 features a torrefied spruce top and Indian Rosewood back and sides.

● THE BOTTOM LINE: The Taylor Grand Pacific models represent the most significant enhancement and improvement of the traditional dreadnought flattop steel-string acoustic design and sound since the dreadnought’s introduction 85 years ago.