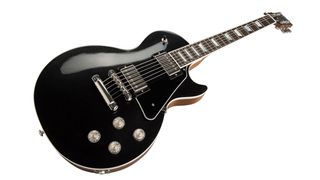 Ever since the Late Fifties, when Gibson installed two humbucking pickups on the Les Paul Model electric guitar, gave it a sunburst finish and changed its name to the Les Paul Standard, the model has remained exactly that: a standard. From the late Sixties and onwards Gibson has introduced a wide variety of variants of the Les Paul model like the Classic, Studio, Traditional and Tribute, but, as those names suggest, most of these models were designed to deliver a vintage-inspired vibe that evoked the original Standard.

As great as these retrograde models are and were, they didn’t offer a lot for players whose tastes and preferences are more in line with forward-looking refinements and innovations. With the introduction of the new Les Paul Modern model, Gibson has finally rectified that situation by offering a modified version of the beloved Les Paul with the versatile features, fast playability and contemporary styling many of today’s players prefer. If you’ve always loved the sound of a Gibson Les Paul, but found the model just a little too outdated, the Les Paul Modern is the version you’ve been waiting for.

With the exception of the gloss nitrocellulose lacquer Faded Pelham Blue, Sparkling Burgundy and Graphite finish options and clear Top Hat control knobs, the Les Paul Modern looks almost identical to Standard models and similar variations from the past, but closer examination reveals many more changes beyond its cosmetic appearance.

Like the original Standard, the Modern is constructed with a mahogany neck and mahogany body with a maple slab top, but the body features Gibson’s "ultra-modern" weight relief that reduces the overall weight to nine pounds or less. For this model, Gibson has returned to using genuine ebony (instead of the previous ebony substitute Richlite) for the fretboard, which also features a 10-to 16-inch compound radius. The neck also features 22 medium jumbo frets and an asymmetrical slim profile that’s thicker and more curved at the bass strings, and thinner and flatter at the treble strings.

A few notable changes have been made to the hardware as well. While the tuners have familiar-looking Kluson-style tulip-shaped (or keystone) buttons, they’re actually a set of locking Grover Rotomatics. The Nashville Tune-o-matic bridge and stopbar tailpiece are crafted from lightweight aluminum to enhance resonance and brightness. Electronics consist of a Burstbucker Pro Rhythm neck humbucker and a Burstbucker Pro + Lead bridge humbucker.

Push/pull functions on all four control knobs greatly expand the available tonal options. The volume controls provide coil splitting for their corresponding pickups when pulled out; the neck tone control engages an out-of-phase setting when both pickups are engaged; and when the bridge tone control is pulled out, it instantly mainlines the bridge pickup only directly to the output, completely bypassing the settings of all of the volume and tone controls, and the pickup selector switch.

The Gibson Les Paul Modern’s tone is 100 percent Les Paul, although the Burstbucker Pro pickups provide character that’s a touch brighter and more aggressive. The push/pull control knob functions exponentially expand the tonal palette of your Les Paul, with the coil-splitting functions providing the bark and bite of P90 single-coils and the phase switch delivering a wonderfully wah-like honking, hollow midrange with a multitude of variations when using both pickups and experimenting with various tone control settings.

The bridge tone control’s bypass function is the real killer here, providing an instant balls-to-the-walls aggressive boost that’s ideal for leads that cut to the jugular vein. The Modern’s playability is fast and furious, with unrestricted access to the upper frets (at last). Tuning stays rock solid, and with its updated makeover it looks pretty rockin’ too.

THE BOTTOM LINE: The Gibson Les Paul Modern is a true modern update that delivers classic Les Paul sounds, a significantly expanded palette of tones and the fast playability that today’s players demand.