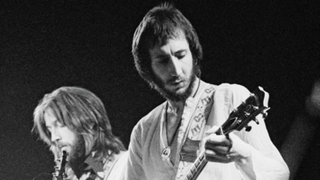 Tone spotters and gear geeks frequently rely on photos and videos of live and television performances when trying to decode the recorded tones of famous players, but this can often be a misleading pursuit. One great example of why that is so is Pete Townshend.

In the early '70s, Townshend was almost always seen on stage with a late-Sixties Gibson SG Standard and massive stacks of Hiwatt amps, but in the studio during this period he rarely used either. Instead, his main guitar rig on classic Who albums like Who’s Next and Quadrophenia was a 1959 Gretsch 6120 plugged into a 1959 Fender Bandmaster amp.

Townshend revealed the details behind this rig to me in a Guitar Player magazine interview in 1993.

“I remember when I gave Joe Walsh an ARP 2600,” he said. “[Joe] went, ‘Pete, I bought you a Gretsch Country Gentleman [actually a 6120 Chet Atkins] like Neil Young uses. I know you don’t really get into them, but you should try this. And I bought you a Fender Bandmaster amplifier with three 10s so the ohmage is crazy, and an Edwards pedal steel volume pedal.’

“I linked it all up, went ‘Ya-a-ang’ and it was there. When I get those three things out and put them in a chain, it’s a sound from paradise.”

The Edwards volume pedal and even a Whirlwind cable (which Townshend later mentioned was also essential) play subtle but critical roles in the finished tone as both roll off some of the harsher high-end frequencies to give the Gretsch more growl than twang.

TONE TIP: Back down the Pro Junior’s tone control to tame the twang and crank up the volume to maximum overdrive.

*Since Fender tweed amp controls go up to 12, settings here are from 0-12 instead of the usual 0-10
**Townshend used a second B string for the G string