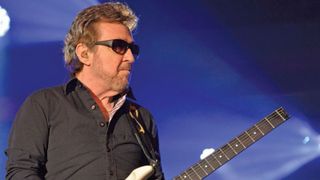 Although Blue Öyster Cult was already filling arenas as a headlining concert act before the band entered New York’s Record Plant to make its fourth studio album, Agents of Fortune, released in May 1976, the band had little radio airplay, no hits and no Gold records. That all changed when Blue Öyster Cult chose “(Don’t Fear) The Reaper” as the first single from Agents of Fortune. The song’s unusual blend of smooth vocal harmonies and dark, foreboding guitar riffs and solos was a stark contrast to most of the other material that rock radio favored at the time, but the combination was perfect for the song to appeal to popular music and hard rock fans alike.

“(Don’t Fear) The Reaper” was written by lead guitarist Buck Dharma, who presented a demo of the song to the album’s producers, Murray Krugman, David Lucas and Sandy Pearlman. Everyone who heard the demo was drawn to the main guitar riff — a tension-filled Am, G and F chord progression played as an arpeggio pattern on the bottom four strings, with the open G string ringing out like a tolling funeral bell on each quarter note. This overall effect was like the “House of the Rising Sun” meets the House of Usher.

At Krugman’s suggestion, Dharma played the producer’s Gibson ES-175 instead of his preferred 1969 Gibson SG Standard to record the riff and basic rhythm tracks. The decision to use a full hollowbody jazz guitar was perfect, as it had the right balance of warmth and twang to complement the arrangement’s moody ambience. Dharma played the ES-175 through his Music Man 410-65 combo dialed in to a pristine clean tone, and room-distance miking and the studio’s EMT plate reverb provided a dreamy sense of depth and space.

For the fills and dramatic solo section, which shifted the song’s tone to a Middle Eastern or even flamenco flavor, Dharma switched to his ’69 SG and cranked up the Music Man’s power amp to provide the necessary overdrive and sustain. Ambience came courtesy of the EMT plate reverb and a subtle tape delay effect generated by sending the solo track to a separate four-track recorder and cascading track one into track two, track two into track three and track three into track four. Dharma also employed a simple but very effective trick to generate feedback at the perfect, desired moments by holding the SG’s headstock against the Music Man’s speaker cabinet.

TONE TIP: Use the Super Champ’s 65 Twin Amp voice setting for its bright clean tone and dial in the Large Room reverb effect so it provides a subtle ambience that thickens the sound but doesn’t call too much attention to itself.