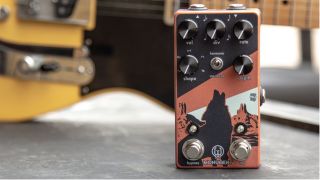 An upgraded and downsized version of the company's original Monument pedal, which was launched in 2017, the pedal features the ability to use the expression jack for setting external tempo or providing expression control over rate, depth, shape or tap multiplier, improved tremolo response across all rates and top-mounted jacks.

For more info, head on over to walrusaudio.com.