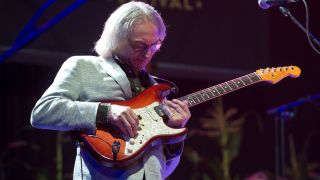 With players like Eric Clapton and Vince Gill name-checking him as one of the finest slide players in the world, Sonny Landreth has maintained a steady and fruitful career since the early 1970s, recording a stream of solo albums, guesting on many more and maintaining a busy touring schedule with his trio.

This tutorial is based on the trio format with just bass and drums backing allowing the guitar to be heard loud and proud! However, before getting started, there are a couple of things you’ll need to prepare.

Sonny’s sound isn’t just about his gear - he usually plays in an open tuning. Our tab examples use his favorite: open E (low to high: E B E G# B E). By tuning the third, fourth and fifth strings up in this way, you’ll now have a ringing E chord when you strum the open strings.  Ideally, use a fixed-bridge guitar to avoid difficulties with string tension.

Next, you’ll need a slide. Sonny prefers a heavy glass slide, which he wears on the fourth finger of his fretting hand, leaving his remaining fingers free to fret in the conventional manner. This is key; Sonny will often fret a note or two behind the slide to give unusual voicings. Have fun!

1. Staying in one position

As you can hear, the tone is fairly overdriven, but not so much that we lose clarity. Much of the distorted effect is generated by letting notes ring together - and this is where the open tuning really comes into its own. Remember to position your slide directly over the fret for accurate pitching - we’re in 12th position here.

Starting with a Keith Richards-style hammer-on, the slide is brought back into play as we head for the A chord. After sliding down to G, we then head back to the open E chord (via a quick F# at the 2nd fret). Here, we revert back to conventional playing, with a hammer-on, slide and pull-off.

3. Fretting behind the slide

Sonny often frets notes behind the slide to give voicings you might not normally expect to hear using a bottleneck. In this case, the second string is pressed at the 5th fret, while the slide is positioned at the 7th. Though it is lifted off briefly in this example, you can see how it expands the possibilities – once you have developed the skill!

4. More behind the slide

Once again, this example features fretted notes behind the slide. Sonny makes this easier for himself by using heavy strings and a high action (generally the best option for slide guitar) but it is possible with a light touch and some patience!

5. Putting it all together

This final example mixes conventional playing, bottleneck and fretting behind the slide to give an overview of what we’ve been concentrating on here. This isn’t an easy technique at first, but by keeping the gain low and using a light touch, some amazing sounds can be made!