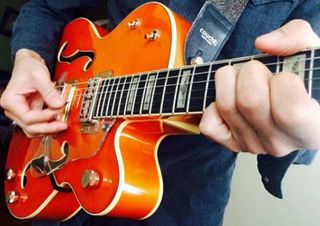 When soloing, I try to use a balanced mix of scales, intervals and arpeggios.

Something I always struggle with is trying to incorporate arpeggios into my solos without having them sound too generic.

A lot of the common arpeggio shapes are difficult to use without sounding "cliche" or like a bad Yngwie Malmsteen clone. It might come as a surprise to players to hear that you don't have to use a sweep-picking technique to play arpeggios!

Here's an easy arpeggio shape that can be learned and incorporated into your playing relatively easily. The goal is that harmonically it's clear I'm playing the same basic arpeggio — but hopefully in a more creative way. It basically involves playing arpeggios as separate intervals "stuck together."

When you factor in the root octave, you end up with the following interval sequence: minor 3rd (A - C), major 3rd (C - E), perfect 4th (E - A). When you play Example 1, it's easy to hear the harmony of an A minor arpeggio, but to me it sounds a lot more interesting than a straight-forward arpeggio.

Example 2 expands on this idea by combining multiple arpeggios in the key of A minor to create a more musical-sounding lick. This example outlines the following arpeggios: A Minor - G Major - F Major. Use this as a starting point and then experiment with your own ideas using my method to make your own unique sequences.

The final clip on the audio is an example of a similar lick used in an actual solo from one my own songs. I play a straight-forward E minor arpeggio, which leads into a basic pentatonic descending lick. It's simple but effective!

Will Wallner is a guitarist from England who now lives in Los Angeles. He recently signed a solo deal with Polish record label Metal Mind Productions for the release of his debut album, which features influential musicians from hard rock and heavy metal. He also is the lead guitarist for White Wizzard (Earache Records) and toured Japan, the US and Canada in 2012. Follow Will on Facebook and Twitter.