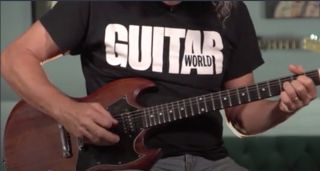 Last month, we explored the somber-sounding minor add-2 arpeggio, also known as minor add-9, which is simply a minor triad arpeggio with a second, or ninth, added on top or sandwiched between the root and the minor, or “flatted,” third, resulting in a four-note entity, spelled 1 2 b3 5.

Using the theory-friendly key of A minor to demonstrate, I offered more than a dozen different two-octave fretboard patterns and fingerings for an Am(add2) arpeggio (A B C E), giving you plenty of options for playing it all over the neck.

I’d now like to introduce you to minor add2’s blissful, optimistic sibling, major add-2 (alternatively analyzed as major add-9), which is based on a major triad and spelled 1 2 3 5. To convert minor add-2 to major add-2, simply “un-flat” the minor third, making it major.

For example, FIGURE 1 depicts both an Am(add2) and an Aadd2 arpeggio (A B C# E) in open position, plus a couple of voicings of each arpeggio’s corresponding chord, configured as either an add2 or an add9.

FIGURE 3 illustrates just about every remaining fixed-position shape for playing an Aadd2 arpeggio across two octaves, all of which are again very similar to their Am(add2) counterparts that I showed you in the previous lesson. In each pattern, I’ve converted the minor add-2 shape to major add-2 by substituting C# for every C natural.

FIGURE 4 presents several extended-range Aadd2 patterns that have you traveling diagonally up and across the neck, from low to high, using four-note “modules,” or “cells” that are transposed to higher octaves via quick position shifts. As with the extended Am(add2) patterns I showed you in the previous lesson, practice each of these Aadd2 forms both ascending and descending and ultimately in a smoothly flowing rhythm, striving for a seamless note flow and making the position shifts sound unnoticeable.

Try to identify and isolate any finger- or pick-friendly one-octave “shred cells” that reside within a longer pattern and loop small groups of notes into a repeating speed lick, played as either triplets or 16th notes, that you can incorporate into your own soloing vocabulary and use to add color and depth to a major or minor tonality. Next time, I’ll show you some more cool things you can do with both major and minor add-2 arpeggios.