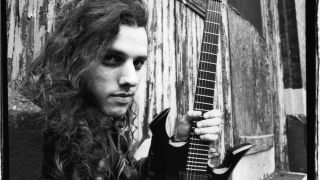 Follow this typical example of 1950s popular music by voicing the chord shapes (notated) and arpeggiating with a soft – medium pick. Try the pick strokes as directed unless you favour a different approach. Buddy played with gusto and you should do the same.

The key to this example is keeping a steady, tight ‘staccato’ by playing short eighth notes with downstrokes, taking note of the rests by muting with the fretting hand. Hit the Hendrix-vibed 7#9 chord and slide with all the swagger you can muster.

Keith is best known for his perfect pop-rock parts on the major Bryan Adams recordings and is one of the tastiest players around. He always chooses the perfect note for the moment, so take this slowly, noting the slides and vibrato, and use a confident legato technique to descend this Major scale idea.

Christian was one of the first to drag the guitar out of its supporting role and onto the front bench. Take this jazzy lick at a slow tempo to start with, programming your fingers around the two positions and chromatic lines. Add the swing-feel when you have it comfortably under your fingers.

The much admired death metal master’s use of the diminished sound is ever present in metal today. Schuldiner led the band Death until his untimely demise from a rare type of brain cancer in 2001. Use legato at the top of this lick, descending in triplets with precise picking and moderate palm muting.

This fine Swedish guitarist played the super solo on Europe’s smash hit, The Final Countdown. Follow the picking directions for the arpeggio shapes before adding the pull-off (notated with two 16th notes).

Listen carefully to the audio as doubling up the rhythm can prove tricky. Thankfully the last bar is easier despite being faster!