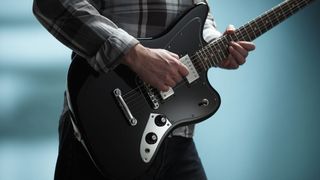 A bar of 4/4 is like the fraction 4/4, in that it can comprise any of the following equivalent rhythmic values:

In standard notation, a quarter note has a vertical line, what’s known as a stem, directly below a solid note head, which looks like a black circle that’s slightly elongated, or oval-shaped. In Guitar World's rhythmic tab notation, a tab number is used instead of a note head.

A half note has a stem and, in standard notation, a hollow note head. In rhythmic tab, a circled tab number is used, with a stem. For a chord, a vertical stack of tab numbers is enclosed in an oval.

A whole note looks like a half note but has no stem. In standard notation it’s just a hollow note head, and in rhythmic tab it’s a number or stack of numbers with a ring around it.

A rest is a “hole of silence” that can occur between any two notes or chords. Every rhythmic value has a corresponding rest of equal duration, for which you continue to count beats and tap your foot in a steady pulse, but without playing anything.

When it comes to phrasing, rests are essential, since without pauses in music, you have an uninterrupted stream of sound, like an endless sentence with no “breaths” taken, which you’ll find can quickly become overwhelming.

Using an open E chord to illustrate, FIGURE 2 exemplifies a few ways in which whole notes, half notes and quarter notes may be interspersed with their rest equivalents - whole, half and quarter rests - to create moments of silence between sounds while always adding up to four beats in any given bar, per the “law of 4/4 time.”

Note that, because this chord shape includes open strings, you’ll need to use both hands to stop them from ringing during the rests.

If you were to do the same thing with a fully fretted barre chord, such as a 3rd-position G, silencing the strings is actually a more convenient and economical procedure and movement, since all you need to do to kill the string vibration is relax and loosen your fret hand's grip on the strings, just enough that they break contact with the frets, but without actually letting go of the strings, as that might cause them to ring open. The same technique works whether you’re fretting a chord or a single note.

Rhythmic values, not including rests, may be linked and added together, or tied, to extend the duration, or sustain, of a note or chord without having to pick or strum it again.

In rhythmic tab, a tie is indicated by a curved, broken line that arcs upward from one tab number then down to the one that follows (to the right of it), which is enclosed in parentheses, unless it’s a half note or whole note, which already has that ring around it. In standard sheet music, a tie is indicated by a solid, unbroken line that arcs between two note heads, and parentheses are not used.

Tied rhythms, or ties, for short, are very useful for creating unusual, unexpected phrases, with notes or chords held across beats and bar lines, as demonstrated in FIGURE 3. Be sure to tap your foot steadily and count the beats when playing this example, as these are very beneficial habits to establish, ones that will make you a better, more competent musician.