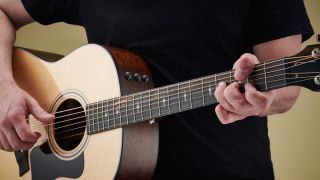 In the previous two lessons, we looked at celebrated examples of musically effective ways in which songwriters, when composing in a major key, have borrowed chords, specifically triads, that are generated from its parallel natural minor or harmonic minor key and scale. As you recall, we checked out uses of the sad-sounding and hauntingly beautiful iv (four minor) chord and the somewhat brighter but equally poignant bVI (flat-six major), which are typically, but not always, preceded by the IV (four major) chord.

Forging ahead with this fascinating topic, I’d now like to cite a few equally famous ways in which musicians have expanded upon this chord borrowing concept and used what would be considered the bVII dominant-7 chord, or bVII(dom7), which, due to its dissonance and more complex structure than that of a major or minor triad, creates a more sophisticated-sounding chord change and a dramatically bittersweet effect as it approaches the I (one) chord and resolves to it.

A classic example of this move, in the easy-to-think-in key of C major, can be heard in the extended outro to Layla by Derek and the Dominos, where, at 3:13, pianist Jim Gordon plays the chord sequence C - C/E - F - F two times, then goes to Bb7, as simply outlined in FIGURE 1.

This surprise move creates a stirring effect, especially when Gordon plays his signature melodic line over the changes, which, over Bb7, climbs up to a high E note, the #11 of that chord (Bb7#11) with the notes Ab, C, D and E, then descends melodically to D, C and Ab. The Ab note then resolves satisfyingly to G, the fifth of the following C chord.

That C9 chord, which may be thought of as a harmonic outgrowth of Gm, the borrowed iv chord from the parallel key of D minor, with an alternate or substituted bass note, creates a unique and elegantly melancholy sound, especially when heard against singer Steve Perry’s descending melody on the words “believe what I say.” As with the Layla piano melody detailed earlier, this one also draws from the borrowed iv chord's melodic minor scale, which in this case would be G melodic minor (G, A, Bb, C, D, E, F#).

During The Beatles’ golden mid-'60s period, Paul McCartney employed this same kind of harmonically tart move in two masterfully written piano-driven songs. The first was at the beginning of For No One, which is in the key of B major, where the changes go B - D#m/A# - G#m - B/F# - E - A - B.

The bVII chord here is A, and while, in the accompaniment, it’s just a stacked triad (A, C#, E), and not a dominant 7 chord, McCartney provides the dominant 7 tone, G, in his vocal melody, at 0:08, on the lyrics “when she,” resolving it beautifully to F#, the 5th of the B chord that follows.

The brilliant songwriter reached what could arguably be considered an even greater creative height in the chorus to Hello, Goodbye, which is in C, where, at 0:24, the progression goes C - C/B - Am7 - C/G - F - Fm/Ab, then repeats with an alternate ending chord, Fm/Bb, which may be also analyzed as Bb9(no3), the bVII(dom9), which falls on the lyric “good-bye.” FIGURES 3 and 4 sketch out these two inventive and highly hooky progressions, arranged for straight barre chords.

Senior Music Editor “Downtown” Jimmy Brown is an experienced, working musician, performer and private teacher in the greater NYC area whose personal and professional mission is to entertain, enlighten and inspire people with his guitar playing.