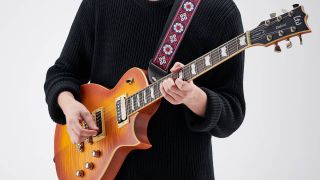 Many guitar players spend a lot of time working out how to solo over chords. Well, the opposite is also a common stumbling block. So, instead of starting with a chord progression and figuring out what to play over it, you’d be starting with a melodic lick that you want to put chords to.

Your first step is to work out what key you’re in. It’s usually easy to pin down the root note by ear. Next up, decide whether you need a major or minor sound. Playing any notes three frets above the root? Then it’s minor. Four frets and it’s a major key. Read on and we’ll show you how to choose some chords.

This rock-ballad-style lick is in the key of A minor, which uses the notes A, B, C, D, E, F and G. The backing chords also use these notes.

For example, Am uses A, C and E notes; Em uses E, G and B; F is made up of F, A and C. Sharing notes is a guaranteed way to match up your licks and chords and keep them in the same key.

Now try playing the lick over these chords. It’ll sound different, of course, but all the chords use notes from the key of A minor – so everything is still in key.

The notes in the first chord (G) are almost the same the beginning of the previous progression (Em7): E, G, B and D for Em7, then G, B and D for a G chord.

5. Notes from outside the key

You can try adding notes from outside the key too – just remember that it won’t always work. Here we’re adding a C# note (in the A7 chord) and an F# (D7).