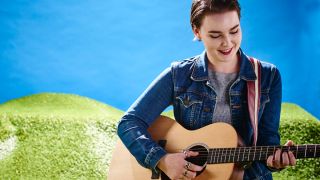 If you're taking your first steps in guitar playing, you've come to the right place: we've put together a list of easy guitar songs that are sure to further your progress on the instrument, and impress your friends.

Whether you play electric or acoustic guitar, this list contains well-known songs from multiple genres, all with three things in common: they're simple to learn, recognizable, and guitarists of all skill levels can play them.

Some are classic campfire guitar songs - so-called because they make excellent singalong tunes - while others are more riff-based, perfect for electric guitar players.

So what are you waiting for? Dive into these easy guitar songs and you'll be playing your favorite tunes in no time.

Jack White’s ear worm is one of the most recognizable guitar riffs of the 21st century and it’s also one of the easiest guitar songs to play: just seven notes played one after the other and all on the fifth string. Easy! Think you need tab? Pish!

Locate the fifth string (clue: it’s the second fattest one on a standard six-string guitar) then play the following frets in order: 7th 7th 10th 7th 5th 3rd 2nd; finish off with G5 and A5 powerchords and that’s it, the whole riff – just listen carefully to the track to pick up the rhythm.

Jack’s real secret is his tone though, using a pitch shifter effect set to reproduce each note an octave lower. If you’re a beginner, don’t worry about it too much for now. Just focus on playing each note as clean as you can.

Four easy chords, one masterpiece. This gospel-tinged folk song, originally appearing on the soundtrack to Sam Peckinpah’s 1973 Pat Garrett & Billy The Kid western, is one of Dylan’s most popular tracks. Turns out the chords are a doddle too.

The progression’s simple: G-D-Am then G-D-C every other time. Sure, there are a couple of chord variations (an alternative C shape and an Am7 created by fretting a 3rd-fret G note on the first string), but, truth be told, you could leave ’em out. Just focus on the main chord progression while you get used to playing through the changes.

With the chords down, turn your attention to strumming. It’s a straight ‘down up down up’ 16th-note pattern - and your feel is crucial. That strummed line is a core part of the rhythm section, apparently driving the track more than the drums and bass do in places. Just try to stay steady and don’t speed up or slow down!

Much like Knockin’ On Heaven’s Door, One opens with an acoustic guitar line propelling the song along on some beginner-friendly chords. There are two progressions to tackle: Am-Dsus2-Fmaj7-G in the first half of the verse then C-Am-Fmaj7-C to round it off. As it happens, these two sequences cover the whole song so it’s pretty much all you need to know.

If there’s one key piece of advice it’s this: don’t be put off by the unusual sounding sus2 (suspended 2) and maj7 (major 7) chords. They get their names from a point of music theory but the shapes are actually easier to play than standard D and F chords.

As you play, listen out for the light bounce of the acoustic guitar and try to lock in with the feel of the drums. A little emphasis on each snare drum hit will help.

Daunted by the challenge of a full-length song? Best take a listen to this classic protest style folk song from Tracy Chapman then. Opening on a simple four-chord progression (G-C-Em-D) the song changes to… erm, well, actually it doesn’t change! Get that sequence down and you can play to the end.

The magic in Talkin’ Bout A Revolution is its dynamics - that’s how loud or soft you’re playing - and it’s matched by the other instruments too. The song clocks in at under three minutes but the arrangement still takes a full 75 seconds to build up to roughly full pelt.

Playing on your own (and we’re assuming you probably are)? Try varying how hard you strum your guitar and how busy your rhythm is. It’s a great way to give a sense of the dynamics in the recording.

We used the term ‘ear worm’ to describe Seven Nation Army, but Jack White’s anthem for the 21st century has nothing on this 1955 offering from Muddy Waters and fellow guitarist Jimmy Rogers. If we had to pick just one riff to sum up the whole of Chicago blues, maybe all blues, it would probably be Mannish Boy.

The iconic guitar line boils down to just five notes: A D A C A. Seriously, that’s it. Go and get riffing on this easy guitar song. Our work here is done!

Okay, assuming you need a little more info, the riff is actually played by guitar, harmonica and bass, each adding harmony and color. So why not try something similar yourself? For example, you could play the five-note line higher or lower in pitch on the fretboard.

Don’t get what we’re on about? Just jam along with the five-note riff. Most players will develop the ability work this kind of riff out by ear.

Clapton’s wailing intro is perfect for any beginner guitarist trying out their first solos. In most respects, it’s an easy lead line and it’ll definitely stick in your mind (we won’t say ‘ear worm’ again!). If there’s a challenge though, it’s those string bends.

For the uninitiated, string bending is a playing technique where you change the pitch by, well, bending the strings – you can hear it right from Clapton’s very first notes.

Thing is, even experienced guitarists can fluff Eric’s fluent bends, so make sure you’ve got the basics down. Keep pressing the string down as you bend - that’s crucial! And remember, you’re aiming to bend up to another note on the fretboard (usually one or two frets higher), not a random in-between spot.

The tried and tested way to practice is to play the un-bent target note on the fretboard first, then bend the string to hit it. Just make sure to listen carefully as you go.

Billy Ray Cyrus uses a capo on the 4th fret of his guitar. This device is a clamp that holds the strings down against any fret you choose, raising the pitch of the guitar - perfect if you’re a singer with a higher voice or if you just need to change the pitch of a song.

In Old Town Road then, Billy Ray plays the shapes you’ll recognize as those staple beginner chords but four frets higher. Technically, it means the chord names are all different, but just remember them as the E, G, D and C shapes for now - these are classic chords you'll find in a host of guitar campfire songs. Our advice? Invest in a capo. Countless guitarists use ’em.

There are two chord progressions in this Kurt Cobain-penned alt-rock/grunge acoustic number. The intro and verses follow an E5-G5-D5-C5 sequence; the choruses go D5-C5-G5-Bb5. Simple enough! It’s only five chords in total and they’re all nearly identical in terms of how you place your fingers. Learn D5 and the others should fall into place.

For D5 you’ll be playing the 5th fret on the fifth string, then the 7th fret on third and fourth strings. C5 and Bb5 are the same, just two frets lower each time. Aim to keep the other strings quiet by resting your fretting fingers against them. Kurt himself wasn’t too careful, though - he’d fret the second string with his third finger at times, turning the ‘5’ chords into standard major chords.

G5 is, as we say, the same shape - just played on the fourth, fifth and sixth strings. E5 is much the same but down in open position and with an open string. It’s a super-easy guitar song!

9. The Beatles - Twist And Shout

Perhaps what makes this Fab Four cover so great for our purposes is that every guitar part is achievable for novice players. Wanna stick to easy open chords? Sure thing – it’s D-G-A for the whole song, except for the breakdowns, where it just stays on A. Piece of cake!

Fancy something a little riffier? George Harrison’s line (panned left) kicks in at the start of the song and plots its way from the open fifth string to the 2nd and 4th frets before weaving around the D, G and A chords. Okay, it’s not immediately playable like open chords but it shouldn’t take you long. Even the two-note shapes in the solo are achievable with a bit of practice.

In an intimate solo performance in 2015, the megastar singer-songwriter showed that sometimes all you need is a guitar and the bones of a damn good song. Donning a Johnny Marr signature Fender Jaguar and dialing in just a dash of breakup, Swift delivered a stunning reinvention of a song that might not otherwise appeal to a more traditional guitar-playing audience.

At the heart of it? C, Em and D in the verses; G, D, Am and C in the choruses - five shapes in all! And with a gentle tempo, we’d say that’s bang in beginner guitarist territory. Probably the hardest thing is just remembering the order of the chords. Like all of the easy guitar songs here then, just practice, practice, practice!