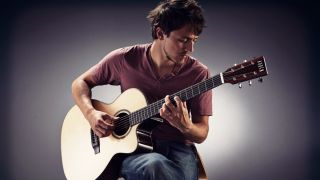 Learning cover songs is an important part of any guitarist’s development. As well as developing essential technique, growing your repertoire and practicing rhythm and timing, you also discover the original guitarist’s style and approach and gain an understanding of how songs and guitar parts within arrangements are written.

Cover songs are an essential part of any wedding/party band setlist, as well as for acoustic nights, busking, YouTube channels, auditions, and are simply great fun to play at home too.

The cover versions that usually top the lists of ‘greatest covers ever’ are often the ones that have undergone the most interesting or dramatic alterations compared to the originals. In the world of guitar, this is epitomized by Jimi Hendrix’s seminal cover of Bob Dylan’s All Along The Watchtower, a cover that even Dylan later acknowledged as being superior to his original recording.

No matter what platform, scenario, audience or purpose your cover versions are for, it’s usually fair to say that, provided you do a reasonable job of your cover, the more creative, unusual and different it is, the better. So here are some quick tips on how to create interesting, unusual cover versions of your favourite songs. These tips range from the straightforward to the borderline weird! So enjoy yourself and have fun with it. Good luck!

P.S. If you need some inspiration for which song to cover, take a look at these guitar tabs.

This first one’s a pretty big one, a complete stylistic overhaul. Create a reggae cover of a pop song, a bluesy version of a folk song or convert jazz standards into beastly death-metal tracks!

Your main effect is achieved instantly in that the cover version is going to be automatically quite different from the original. You can also use the conventions of the style you’re converting the song into to help guide you on its other features.

Another really great side effect of the process is that you’re going to gain a deeper understanding of both the musical genre you’re converting the song from, and the one you’re converting it to. You'll come away from the process with an innovative, weird cover and you’ve deepened your knowledge and experience along the way.

The key point here is that changing the genre is a shortcut to re-vamping a song. If you pick a rock song you know and tell yourself on-the-spot to play a reggae version of that song, you may find that you instinctively then approach the chords, tempo, rhythm, strumming, muting, articulation and expression in a very different way. So if you have a good feel for the genre you’re converting to, you don’t have to go through the processes of changing these individual elements; it’s built into the genre change.

Simply put, what can you change about the song’s intro or lack of an intro? If it doesn’t have one, try adding one (and perhaps one that’s quite different to the first verse and a feature in its own right).

If the song does have an intro, try removing it and beginning the song smack bang on verse 1. Or again, you can lengthen it, or make it more of a feature.

This is your chance to set the tone for the rest of your cover, so start as you mean to go on. If you’re doing a weird cover, give it a weird intro! If you’re doing a genre conversion (see above), then make sure you’re intro is authentic to that genre.

3. Speed it up/slow it down

Another one that’s based on a pretty simple principle, but you need to be aware of the effect your tempo change will have on your cover.

Tempo can be very closely attached to genre and style. So doubling the speed of the original is certainly going to dramatically change it, but how does that sit with the overall context? If you’re planning a mellow folk cover of a pop song, it’s not going to work. And likewise, you shouldn’t be planning a dance version of a rock anthem at 60 bpm.

Be creative, inventive and unusual, for sure, but certain rules are there for a reason. So speed it up or slow it down, but within the stylistic constraints of your target genre!

This is a challenging but rewarding thing to do. If you don’t understand how time signatures work yet, make sure you get that knowledge under your belt before taking this on.

The main obstacle you’ll find when you try to change a song’s time signature is that it requires some kind of alteration or adaptation of the rhythmic phrasing. Your new time signature may mean every bar has one extra (or one less) beat, and so the musical content has to be re-worked to suit that. You may need to create something to fill that extra beat, or find a way of re-phrasing the lyrics to fit into a smaller space than before.

These are the challenges, but they put your musical abilities to the test, so it’s really good practice. And all being well, you come out the other side with a really cool cover.

We guitarists don’t usually require much encouragement to insert guitar solos, and we have a good excuse to do so here. A well-placed guitar solo can really inject some life into a cover song, especially if it’s an element the original doesn’t have.

If the original song does have a guitar solo, then the challenge just takes on a different nature. What can you put in its place? Kind of an open-ended question, with many possible answers. A chordal solo, riff, repeating melody, patterns formed from unusual scales, rhythmic breakdown, whatever it may be, the challenge here is to do something different. So look at the possibilities and be creative.