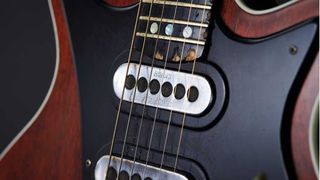 Hand-made by Brian and his father in the mid-'60s, the Red Special is amongst the most iconic electric guitars ever made, and the ingenious pickup-switching system the pair designed allows it to produce some unconventional yet instantly recognisable sounds.

We asked Simon Bradley, the man who quite literally wrote the book on the Red Special, to tell us how it works and how to dial in some Queen-esque tones equipped only with a Strat or a Les Paul-style guitar.

These are the specific pickup settings used on some of Queen’s classics. Brian says that every sound available from the guitar was used somewhere during the recording of Bohemian Rhapsody and, if you get frustrated trying to find just the right tone, you’re in good company; it’s a battle he has every time he enters the studio.

With thanks to Mike Ryde

Unusually, the volume pot is set furthest away from the switch array and is one of the secrets to how Brian gets so many different tones from a single boosted Vox AC30.

He doesn’t use channel switching, so to obtain clean or light overdrive tones he’ll roll the volume down to lower the gain.

The pots have been replaced many times over the years, and, in 2018, it was changed to a KAT Superpot. To make room in the control cavity, the tone pot, which Brian found he never used anyway, was replaced with a simple bolt.

The top row comprises on/off sliding switches for each pickup – up is off, down is on – but it’s the bottom row where magic happens. These are phase reversal switches that allow Brian to flip the polarity of the pickups in relation to each other, radically altering their tonal performance.

Brian’s go-to rhythm sound is the bridge and middle pickups together in phase, and that gives a fat, humbucker-style overdrive.

If he reverses the phase of the bridge pickup of that same setting and lowers the volume, the sound becomes chimey and thin. Commercially available BMG guitars are loaded with the same system.

The single-coil pickups, still the three original Burns Tri-Sonics, are wired together in series. When combined, their output is higher than if they were wired in parallel like a Fender Strat’s pickups are.

Designed around a ceramic bar magnet, they’re pretty hot to begin with, and, in order to solve issues with microphonic feedback, Brian had to fill them with Araldite.

His most revered tone comes from a treble booster, a number of Vox AC30s that are turned up full and the Red Special’s bridge and middle pickups switched together in series and in phase; that’s the guitar sound that’s graced every single Queen album and every gig Brian’s participated in since 1966.

Dialling in a convincing Brian May tone with a traditionally-specced Strat is tricky; the comparatively low power of alnico pickups and their parallel wiring see to that, so what are your options?

Well, experiment with amp and pickup settings to find your own way, and bear in mind that an S-1-equipped Strat gives five additional tonal options – a distinct advantage over non-S-1 models.

In the meantime here are some guidelines to get you in the ballpark.

The closest equivalent RS setting is probably the middle pickup out of phase with the bridge, which produces a smart crunch that’s perfectly usable for blues styles. Some Strat bridge pickups can be light on bass so consider raising your amp’s EQ control if you desire a fat-bottomed tone!

Using position two on a Strat gives a similar glassy tone to the RS’s solo’d bridge or middle pickup with the volume dipped a little – great for zinging cleans. The metallic ‘clink’ can be enhanced by the use of a coin as a pick, and adding in a chorus or phaser gives lushness.

There’s a hollow, almost honky nature to the middle position setting of both types of guitar. However, compare the tone on Queen’s White Man, recorded using the Red Special’s middle pickup, with the opening chords of Dire Straits’ Sultans Of Swing that main man Mark Knopfler used the middle pickup of his 1961 Fender Strat for.

They’re quite different in nature and this, in a nutshell, is what Strat players find themselves up against.

Reversing the phase of the RS’s bridge with the middle and lowering the volume gives a roundly throaty tone, something that can be explored with this setting. Rounding off the Strat’s tone works well here too; the effect will differ slightly with which exact Strat you have, so play around and see which works best for you.

Even here a Strat can’t complete with the warmth of the RS, and the solo’d neck Tri-Sonic sounds almost akin to a Gibson SG. Position five with Fender’s S-1 switching system engaged sets the bridge and middle together but out of phase, and combines that with the neck pickup in parallel: lo and behold, a pretty good Bohemian Rhapsody solo tone.

Humbuckers, with their intrinsic warmth and power, make the job of mimicking the rockier tones of the Red Special with a Les Paul far easier, and it’s interesting to note that Brian used one as a spare throughout the 70s, albeit a Les Paul Deluxe that was loaded with mini humbuckers. Here are our suggestions for guitars that feature vintage-style ’buckers.

This is the best option for getting close to Brian’s massive rhythm tone. Remember: it’s not all about gain, so balance your amp’s master volume with the amount of preamp drive you dial in.

A low-wattage all-valve amp works wonders here, as you can wind up the power tube distortion without knocking down walls. Don’t forget that Brian uses a treble booster, too. Be prepared to ramp up your amp’s EQ if your pickups are on the warm side.

The two humbuckers together in parallel give a tone that’s great for recreating the throaty warmth of the RS set with all three pickups on but the middle out of phase, especially if you use the level of gain as a way of adding cut and high end.

With the legendary Peter Green Les Paul, now owned by Metallica’s Kirk Hammett, not only are the pickups magnetically out of phase with each other, but the neck pickup is also the wrong way round.

When both are combined, the tone is nasal and instantly ear-catching, perfect for a number of classic May solos including Bohemian Rhapsody.

The toasty tones of a Les Paul’s neck pickup are sewn through rock history, and the closest equivalent on the RS is probably the middle and neck together, in phase.

Brian would often use his most powerful setting, all three pickups together in series and in phase, with a small amp made by Queen bassist John Deacon to mimic a cello for his guitar orchestrations, and you can get in the ballpark here by adding extra gain.