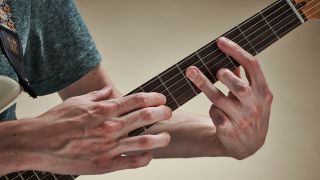 Due to isolation, this lesson is audio-only, which we hope will tide us over until we find a new normal, and deals with spelling out chords or harmony when soloing - a useful skill in a trio with just bass and drums.

Listen to The Jimi Hendrix Experience, Cream and the John Mayer Trio to see what I mean. As a soloist on guitar, this context gives a great deal of freedom, and also carries the responsibility of outlining the underlying chords/harmony, at least some of the time!

This approach is obviously most challenging when playing unaccompanied, but even the simplest bass part can relieve you of the responsibility for holding down the root notes, and the drums can carry the rhythmic momentum.

Having the technique to play intricate lines interspersed with chord fragments really helps, but the core skill here is the knowledge of chord shapes/inversions around the fretboard.

The more you know, the more choices you will have. Keeping an eye open for where chord shapes coincide with pentatonic shapes is a real game-changer, as is separating them into single-note arpeggios to create a harmonically detailed line.

There is various musical language to describe the way you might organize your scale and chord fragments, but I’ve found it helpful to think of the pentatonic shapes as the ‘safe’ zone, with various options to depart temporarily - or completely if you’re feeling it.

This approach can also be used over chords, as long as you know what they are! Larry Carlton manages to imply detailed chord extensions by superimposing one chord over another, so check him out, too.

This example doesn't know if it’s trying to be Jimi, SRV or Mark Knopfler, but that aside, these raked ‘small’ chord inversions spell out the harmony and pave the way for less detailed pentatonic/natural minor scale ideas later in the solo.

In bar 3, I’ve taken the Larry Carlton approach of superimposing a different chord over the implied E minor we’ve already established. This D major voicing gives a hint of E minor 11th, by including the dominant 7th (D), the 9th (F#) and the 11th (A).

Skipping ahead a few bars, I’m spelling out the B minor chord with a quick rake into a short pentatonic phrase, before combining some pentatonic doublestops to make an A minor 9th-7th descending phrase lifted straight from Little Wing.

Steal from the best and all that… You’ll notice a lot of these rakes are left to ring in the first half of this solo with its cleaner tone.

Kicking in the overdrive/boost and flicking to the bridge pickup, this second half takes more of a single-note ‘solo’ approach.

This is helped by having established the chords/harmony early on in the solo, but it’s also because triads and chords like this don’t come over as well with this kind of tone.

However, in bars 2 and 3, there are some descending arpeggio lines implying Em7, Bm7 and G6 - all using shape 4 E minor pentatonic!

There are a couple of raked triads and an arpeggio here, based around the underlying pentatonic framework.

Bar 2 is an exception, spelling out an A minor chord, then a bit of A Dorian – or could it be that I’ve simply returned briefly to the E minor pentatonic?

In any case, this shifts swiftly to a raked B minor arpeggio to finish. Keep this from ringing together by releasing the fret-hand pressure (but not lifting the fingers!) just after playing each note.

This album showcases more of Larry’s blues side, stripped of the production and overdubs you hear on many of his studio releases.

We get to hear how he manages to put across Room 335 with just bass and drums, plus the laid-back blues of Cold Gold, and the funky doublestops and overdriven lead lines of The Prince.

Larry’s deft touch with the guitar’s controls to manipulate the tone from moment to moment is in evidence throughout.

Here’s another live trio - Jimi, Billy Cox and Buddy Miles - coming from a very different angle to Larry Carlton. However, give it a listen and you’ll find that the combination of lead and rhythm ideas using chord voicings, doublestops, octaves and riffs is founded on the same principles.

Check out Who Knows, Power To Love and Message Of Love to hear how Jimi combined influences and styles in a way people that are still mentally unpacking 50 years later.

A stunning example of the possibilities, if we can only acquire the man’s expertise! Admittedly, Gary Mazzaroppi’s bass lays a sophisticated, detailed foundation (especially on Mahoney’s 11 Ohms), but Tal’s chord/melody arrangements and lines are pretty comprehensive.

Autumn Leaves begins with his unaccompanied guitar, showing how he covers all bases, using his thumb for some bass notes. Gymkhana In Soho is his advanced take on a 12-bar progression