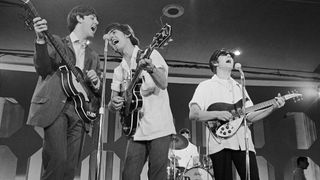 Last time, I introduced the augmented chord, which is a major triad with a raised, or 'sharped,' fifth - spelled 1, 3, #5 - and explained its theoretical origin, which is, it’s the third diatonic triad of both the harmonic minor and melodic minor scales. I also demonstrated how the augmented chord can be used to intensify a V-i resolution in a minor key.

I’d now like to offer additional examples of interesting ways in which composers and songwriters have put this painfully sweet chord to great use, including its application in a major key, which bends the rules of traditional harmony by borrowing an “outside” note from the parallel minor key.

My favorite example of an augmented chord’s use in classical music is in Franz Schubert’s heavenly masterpiece Ave Maria. FIGURE 1 excerpts the passage to which I’m referring, which is in the key of A major.

Notice how the Aaug chord (A, C#, E#) smoothly swells out of the A major (A, C#, E) that precedes it and longingly begs to resolve to F#m, which it does beautifully, with the add9 melody note, G#, on top.

Due to the augmented triad’s symmetrical interval structure and the interchangeability of its inversions, Aaug may also be thought of as C#aug and Faug (or E#aug).

Another celebrated example of an augmented chord’s brilliant application can be found in the opening strains of the 1924 operatic aria Nessun Dorma by Giacomo Puccini, which has been famously recorded by many great singers over the years, such as Luciano Pavarotti and Andrea Bocelli, as well as six-string maestro Jeff Beck, who performed the piece instrumentally and with great feeling on his 2010 album Emotion & Commotion.

In this piece, we’re in the key of G major, and the basic chord change goes G-Daug-G, but with a sophisticated harmonic twist: Puccini added an Ab bass note under the Daug chord, which creates a dramatic, goosebump-inducing chromatic voice-leading.

This move - putting the b2 in the bass instead of the 5 - is referred to in jazz terminology as the tritone substitution, and it emerged in the late Romantic and Impressionistic periods of serious music (19th century), along with the practice of borrowing outside notes and chords from a major key’s parallel minor, which is something we’ll explore further in future lessons.

Returning to the world of pop and rock music, another great use of an augmented V chord (“V+” in formal music theory) in a major key can be found in the early Beatles hit From Me to You, which is in the key of C.

At the end of each of the song’s two bridge sections (at 0:48 and 1:30) guitarist John Lennon strums a G barre chord then Gaug, which creates a nice swelling effect and chromatic, parallel voice-leading moving to C, as in FIGURE 3.

Fellow Beatle Paul McCartney did a similar thing, on piano, with the opening chord to Oh! Darling, which is in the key of A. Here, and also later in the song, at 1:39 and 2:45, he plays Eaug, which creates that signature longing sound and much welcomed resolution to A. FIGURE 4 illustrates this chord change, adapted for guitar.

Blues great Johnny Winter employed a similarly effective move for his brief intro to Please Be Home for Christmas, where he arpeggiates a voicing of Eaug on the middle four strings, followed by a strummed A chord, as in FIGURE 4. His guitar was tuned down a whole step on that recording, so it actually sounds like Daug to G.