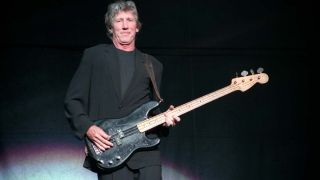 Roger Waters of Pink Floyd used delay to startling effect on One Of These Days (Image credit: Hiroyuki Ito/Getty Images)

Yes indeed! Stand in a large space and shout ‘Echo!’ You’ll hear a discernible repeat of that sound coming back at you as it rebounds off a distant surface. This is an example of the delay effect.

Now, spaces can have lots of surfaces, some near, some far and made of different materials. It follows, then, that lots of reflections of sounds will bounce around a given room. Those scattered multiples of closely-grouped delays make up the sound of reverberation, or ‘reverb’, which is something else entirely.

We’re looking at reverb in my next column, but the difference between the two is essentially that delay is a sequence of isolated repeats, whereas reverb is the more general feel and sound of a large space.

Delay pedals come in digital, and analog variants. The D-word makes some people worry that the sounds made this way will be somehow cold or sterile, but have no fear: The modern digital domain enjoys limitless options and creates truly lifelike sound effects.

It’s also true that the warmer sounds of analog delay circuits are heard on classic recordings the world over. There is a place for both options: I encourage you to experiment. Check out One Of These Days by Pink Floyd for a classic example of delayed bass.

How do I use delay with bass?

I love to use delays to create ambience, to make a doubling effect as if two basses are playing at once, or to create complex rhythms by layering more than one delay effect in parallel. Delay types include:

Tape Delay or Multi-Tap: Early delay effects were created using tape machines with a physical tape running around in a constant loop. The recorded audio would then be ‘tapped off’ at different positions around the tape, offering up complex and interesting repeats. The medium of tape also meant that the repeats had a pleasing tone. Altering the tape speed at the same time made for its own sonic craziness.

Looping Delay: Looping has become a popular artistic choice for bass in recent years. A looper is essentially a single repeat delay effect. Loops can be recorded in layers on top of each other to create complex accompaniments.

Ping-pong: A delay that bounces from left to right across the stereo field.

Slapback A short, single-shot delay which – as the name suggests – has the effect of notes slapping back with little feedback.

I’ve got a delay pedal. What the hell do all those knobs do?

Most delay pedals will come with at least some of the following features:

Time: In terms of the delay effect, this is the time between the first note played and its echo, usually stated in millisecond increments. See also Tap Tempo below.

Beat (type): Aside from selecting the delay in milliseconds, the effect can also be tied to a tempo. Thus, rhythm unit patterns are possible.

Feedback: How many times you hear the repeat, or how long the effect tail is.

EQ, HPF, Tone: As with many other pedals mentioned in this column, equalization can range from a very simple filter to control your top end or go as far as managing in which frequencies the delay effect operates.

Tap Tempo: The ability to ‘tap’ a tempo into the pedal so that echoes are in time with an accompaniment.

Mix, Level: Use these controls sparingly. Delays are fun, but it will be very easy to swamp your punchy bass sound with too much effect.

Hold: Regenerate the delay for as long as the pedal switch is pressed down. This allows you to create choppy, endless rhythms or ‘bowed’ swells.

If I have the opportunity to work in stereo, I use a ping-pong delay that bounces in odd times across the stereo field with awash of reverb to fill in the gaps.

Unless you’re creating a specific effect, keep delays away from your low end. I use a High Pass Filter for those ambient effects, certainly above 400hz.