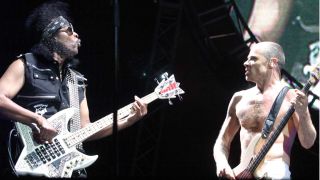 What in tarnation are filter pedals?

These are a group of effects that use electronic ‘building blocks’, also known as filters. A filter, or filter circuit, is like an equalizer in that it shapes the frequency spectrum of an audio signal in some way.

You don't say. What types of filter pedal are there?

Well, many! Some pedals will include several types of filter, not just the examples we’re looking at here, especially in the case of DSP-based (digital signal processing) multi-effect units.

This effect creates a narrow peak in the audio spectrum which is shifted from low to high by the action of a physical pedal that is rocked back and forth.

If you’re unfamiliar with the wah sound, then a slight return to the opening lines of Jimi Hendrix’s Voodoo Child will be necessary! Sorry about the bad pun.

Unlike the manual wah, as an instrument is played, the dynamics of the incoming signal are tracked, and that manipulates the movement of the filter peak instead.

A device whose filter circuit’s sweep is affected by the velocity of the input (or instrument) signal. Furthermore, as well as tracking the envelope of your input dynamics directly, crossing a threshold can be used to trigger a filter sweep in either an upward or downward slope. Intensity and speed of the filter slope are adjustable, so mix them to taste.

Onboard low-frequency oscillators (LFOs) control multiple parameters of filters to recreate analogue synthesizer keyboard sounds. You will also find that envelope tracking is a feature as well, as is shaping your overall instrument envelope.

An example is that swelling the volume after the initial note attack creates a ‘bowed’ sound. It doesn’t stop there: The internal circuitry often included can produce waveform sounds reminiscent of older analogue synthesizers in the form of triangle, saw-tooth and square-wave.

No idea what you are talking about. Anyway, what the hell do all these knobs do?

Lots of cool things! There are so many pedals on the market that I can’t possibly cover every instance and naming standard of controls on each, but here are the most likely ones that you’ll find.

Where can I hear filter effects?

Check out these well-known songs, as suggested by the fantastic members of Basschat!