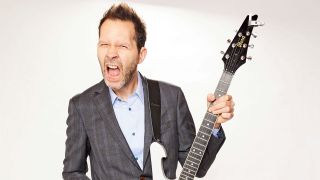 Paul Gilbert’s Intense Rock was the perfect instructional guitar video for the late Eighties. The kids belonging to the WarGames and Back to the Future generation were absolutely convinced they could conquer any physical challenge, including the Cold War and even time travel, through a combination of ingenuity and technology. And where previous guitar instructional videos were, for the most part, a loose collection of phrases, licks and exercises, Intense Rock’s approach was fundamentally technical.

On this seminal REH Video release, Gilbert offered a methodical and mechanical breakdown of the challenges you are likely to face when attempting to achieve true fluidity in your lead guitar playing, especially in regard to picking. And he began not with an exercise, per se, but with a premise.

THE LICK HEARD ’ROUND THE WORLD

Intense Rock’s tectonic shift in thinking arrives only five minutes into the discussion, with its very first musical example. And it is less an exercise than an engineering demonstration (see FIGURE 1).

Imagine we’re sighting down the strings of a guitar, from the headstock to the bridge. In cross section, the strings would appear as a row of circles, with the high E string on the far left and the low E on the right. Now imagine we want to play Gilbert’s famous example, starting on the B string. We need to insert the pick between the G and B strings so that some portion of its point descends below the string action height.

Once we do this, we can push the pick through the B string and sound a note. In fact, we can pick back and forth on that string, by way of alternating downstrokes and upstrokes, for as many notes as we’d like. But when the moment to move to a new string arrives, we learn an ironic fact: alternate picking leaves the pick on the wrong side of the string for the string change. For example, in Gilbert’s phrase, we need to play a downstroke on the B string followed by an upstroke on the high E. That’s our first string change. But the B-string downstroke leaves the pick on the “bass” side of the high E string (closer to the lower strings), not the “treble” side. In order to get to the treble side of the E string without hitting it in the process, we actually need to go up and over the top of it.

On the way back we have the opposite problem. Our E-string upstroke leaves the pick on the treble side of the B string, not the bass side. Once again, we have to go up and over the top of our target string in order to avoid hitting it too soon.

Superimposing these two pathways on top of one another reveals the amazingly sophisticated picking motion necessary to play Gilbert’s phrase cleanly, as graphically illustrated in FIGURE 2.

The technique to actually do this is ingenious. By supinating his forearm, or turning it a small amount against the body of the guitar, Gilbert caused his picking motion to operate on an angle with respect to the strings, as illustrated in FIGURE 3. In this pickslanted world, downstrokes now veered off into the air, away from the guitar’s body, cresting the E string without actually hitting it. Upstrokes traced the inverse diagonal, lifting above the B string. Connecting them produced the curvature, less a figure eight in actual practice and more a flat, fast, squashed ribbon of efficient motion.

Gilbert’s ingenious mechanical round trip between the strings, and the twin wrist motions and tilted forearm position necessary to achieve it, were not totally fleshed out in Intense Rock. But he did mime one of the diagonal movements — the upstroke — in his explanation. And more importantly, he pointed squarely to the problem itself, giving us a clear-eyed view of a practical solution, visible in several of the side-camera shots on the famous instructional video.

In other words, moving to a new string with alternate picking always involves making a motion that goes over the top of whatever is in the way. Even now, 30 years later, this highly insightful observation is no trivial matter!

We’re often told to use small motions, or the smallest possible pick attack, but as long as some amount of the pick’s tip descends below the string height, or crosses that geometric plane, that same mass must come back up again and “hurdle” over the lower or higher string in order to perform the string change cleanly. If you don’t do this, you’ll hit something, and, as Gilbert aptly phrases it: “tons of noises” will occur. So the key is to do this as efficiently as possible, like an Olympic track athlete just barely clearing a hurdle.

FIGURE 4 is an exercise run, inspired by Gilbert, that’s designed to help you in this pursuit of being able to alternate pick across strings quickly, smoothly and cleanly. Try to keep your pick hand as relaxed as possible, use small movements and slant the pick, via the wrist and forearm, as detailed and illustrated earlier.

Watching Gilbert blaze effortlessly across the strings on Intense Rock’s iconic intro solo, it is not at all obvious that this graceful ballet of micro-movements is occurring just below the surface. But Gilbert knew it, and his incisive summary of the problem three decades ago shifted the fundamental discussion around guitar technique instruction. By identifying what it is about guitar picking that makes it so challenging, the gifted guitarist moved guitar teaching beyond arbitrary advice from masters and into the realm of empirical observation. With Intense Rock, Gilbert was no longer just teaching us guitar. He was teaching us to solve persistent technical challenges.