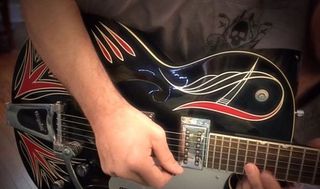 Learning to improvise over jazz tunes in a convincing fashion means learning how to move between creating tension and resolving this tension in your lines and phrases.

Though there are a ton of different ways to create tension in your lines, from using exotic scales to advanced chord substitutions, one of the easiest and quickest ways to achieve this sound in your solos is to use chromatic passing chords, especially over ii-V-I progressions.

In today’s article, we’ll be looking at how you can apply chromatic passing arpeggios into major key ii-V-I progressions in order to begin adding tension to your lines and resolving it on the next chord in the changes.

As a side bonus, we’ll also be looking at 3 to 9 arpeggios over the maj7 chord, which is a must-know arpeggio for any player who is serious about building their jazz-guitar vocabulary.

To begin, let’s take a look at the arpeggio that starts from the 3rd note of any major 7 chord, written over Cmaj7 in the example below.

When you build a Maj9 arpeggio up from the root, C-E-G-B-D for Cmaj7, you will notice that there are two four-note arpeggios in that chord, Cmaj7 from the root (C-E-G-B) and Em7 from the third (E-G-B-D).

With this knowledge in hand, a great exercise to work on seeing the 3 to 9 arpeggio for any maj7 chord is to put on a maj7 backing track and improvise over each chord using only the m7 arpeggio starting on the 3rd note of each chord.

This exercise will open your ears up to this new sound, and it will get you thinking about playing an arpeggio that not only doesn’t start on the root of the chord you’re on, but that doesn’t contain the root at all within its construction.

Now that we’ve looked at the maj7 3 to 9 arpeggio in isolation, let’s take it to a ii-V-I progression and see how it fits into a musical context.

The first exercise we’ll look at is running one-octave arpeggios over each chord in the progression as you see in the example below.

Once you can play these arpeggios ascending and descending in time across different string sets and fingerings on the neck, put on a backing track and improvise over each chord in the progression using only the arpeggios in the example below.

Again, this will get the sound of the maj7 3 to 9 arpeggio in your ears, and you’ll begin to see how it fits into a chord progression in real time, allowing you to start applying it to tunes you are soloing over in a jam session or on the band stand.

Now, one thing you may have already noticed when working on the above arpeggios is that the iim7 chord and the 3 to 9 arpeggio for Imaj7 are a tone apart, Dm7-Em7.

With that knowledge in mind, we can use the space between those two arpeggios to create a chromatic line with a passing arpeggio over the V7 chord, G7 in the example below.

To add this new chord in, all you will do is play the arpeggio that falls between the Dm7 and the Em7 chords, Ebm7, or a biiim7 chord if you are thinking in roman numerals.

Notice how this passing chord adds a sense of tension over the V7 chord in the progression that is then resolved over the Imaj7 chord. This sense of tension and release is a big part of what makes jazz sound like jazz from a melodic standpoint, so this is a great way to introduce yourself to playing with tension if you haven’t done so already in the practice room.

Not all of the notes from the Ebm7 chord will “fit” over G7 from a scale perspective, the Gb is a major 7 interval which is normally a no-no over a dominant 7 chord, but in this case it works because the sound of the arpeggios and the chromatic movement between them is stronger than that one out of place note.

With this new arpeggio under your fingers, go back to the playalong recording and this time improvise using Dm7-Ebm7-Em7 over the chords in the ii-V-I progression.

When you are comfortable doing this in the key of C, mix things up and work it through a number of other keys as well. Then, when you feel ready, take it to a tune that has a number of ii-V-I chords in it such as “Tune Up,” “All the Things You Are” or “There Will Never Be Another You.”

To finish up, I’ve written out an example of a lick that I would play using the three chromatic m7 chords over a ii-V-I progression in the key of C major.

In the third and fourth bar I used chromatic approach notes to spice up my line by adding one chromatic note below each note in the arpeggio as I descended it down the neck.

You can explore these chromatic approach notes further in my previous column, “Three Easy Steps to Creating Killer Arpeggio Lines for Guitar.”

Using passing m7 chords to spice up your ii-V-I’s is a fun and easy way to begin exploring tension and resolution in your jazz guitar solos.

Do you have a favorite way to apply chromatic passing arpeggios to your solos? If so, please share it in the comments section below.