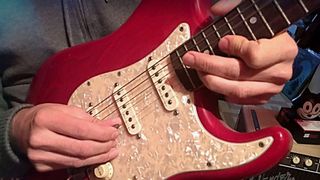 When learning how to play jazz guitar, we can often get bogged down with learning scales and arpeggios and find ourselves not spending time learning the vocabulary that makes up the traditional and modern jazz language.

One of the best ways to build your jazz vocabulary, and your scale knowledge, is to work on both at the same time, by running common jazz patterns through the scales that you will need to outline chord changes when soloing over tunes.

In today’s lesson, we’ll be looking at one of the most important scales in the jazz repertoire, the Bebop scale, as well as three must-know patterns that you can work through the scale and bring into your solos in order to bring a sense of Bebop vocabulary into your lines and phrases.

Before we begin with the licks themselves, let’s do a quick review of the Bebop scale, how it’s built and where you can use it in your solos.

The Dominant Bebop Scale (often just referred to as simply the Bebop Scale), is built by taking the fifth mode of the major scale, the Mixolydian mode, and adding in a natural 7 interval, producing the 8-note scale you see below.

Since it is built from the Mixolydian mode, you can use it to solo in the same way, over 7th chords on their own, or over both the iim7 and 7th chord in a ii-V progression, where you would “ignore” the iim7 chord and play the Bebop Scale over both of these changes.

If you have this scale comfortably under your fingers, adding the licks will be easy. But if you don’t have a good grasp of this scale, it will be much tougher to work the licks in the lesson below.

It would also be a good idea to pop on a backing track, or record yourself coming a C7 chord, or any dominant 7th chord, and soloing over it using only the Bebop scale to build your lines in order to get a feel for how this scale fits into an improvisational situation as well as seeing it across the fretboard.

The first lick we’ll check out over the Bebop scale is sometimes nicknamed the “Honeysuckle” riff, as it sounds like a chromatic version of the opening line to Fats Waller’s classic jazz tune, “Honeysuckle Rose.”

As you can see below, the lick starts on the root of the scale, in this case C, moves down the scale by three notes, but before reaching the fourth note of the scale it is “interrupted” by a Dm triad that breaks up the scale-wise motion of the line. Mixing step-wise scale notes with the larger intervals of a triad within that scale, such as you see here, is a great way to bring a sense of variety to your lines that you won’t get if you just focus on one or the other.

Practice running this lick with a metronome in all keys around the neck to get it under your fingers and into your ears. Then put on a C7 vamp, a ii-V-I vamp, modal tune or jazz standard, and practice soloing over those changes using the Honeysuckle lick as much as possible so that you get a sense of how it fits into a soloing situation as well as a technical one.

This is a great sounding lick, and one that many legendary players use in there solos, and so it is worth checking out this week in the practice room.

By playing a dim7 arpeggio from the 3rd of the scale, you are outlining the 3rd, 5th, b7th and b9th of the underlying 7th chord, creating a sense of tension with the b9 interval that you resolve into the root of the scale with your next note.

Again, this is a classic lick that can quickly bring that Bebop “tension-release” sound into your lines, so work it in all 12 keys and then take it to a tune or progression you are working on in order to explore it in a technical and improvisational context in the woodshed.

The last lick we’ll look at is called an enclosure. This technique involves picking a target note. I used the root and 5th in the example below, but you can pick just about any note and make this technique work.

Work this idea over the root and fifth of the scale the begin with, in all keys and by using it to solo over vamps and tunes, and then experiment with enclosing other notes of the scale as you move forward with it in the practice room and on the bandstand.

If you enjoyed this lick and want to explore these concepts further, check out my article “21 Bebop Scale Patterns for Jazz Guitar.”

Working on licks and patterns through the Bebop scale is a great way to expand your vocabulary and to dig deeper into the language used by great jazz musicians when blowing over standards and Bebop-inspired tunes.