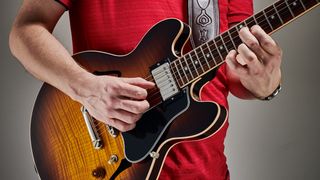 As you advance in your guitar studies, you'll surely come across the term 'arpeggio'. Arpeggios are a great way to add color and complexity to your playing. You can make riffs out of them, use them in solos or even create melody lines with their fluid sound.

Nearly all of the greats use arpeggios. Yet, if you're like a lot of guitarists, you might be shying away from them because you fear being overwhelmed by the 'Twin Ts': theory and technique. If you have a basic understanding of how chords work, though, it's high time to get your feet wet.

Here are eight things you need to know to help demystify the arpeggio.

1. What is a guitar arpeggio?

The word arpeggio (ar-peh-jee-oh) comes from the Italian word arpeggiare, which means "to play a harp." (If you can visualize harpists, they often articulate notes by plucking the strings one at a time.)

Arpeggios, often called broken chords, are simply notes from a chord played individually instead of strummed together.

2. What arpeggios can do for you

Arpeggios create a fast, flowing sound. Besides using them for speed in playing, arpeggios add a kick to improvisation skills. Because an arpeggio contains all the notes of its chord, you can use them in your solos and link them to what's going on in the chord structure beneath you to create cool-sounding licks.

Arpeggios always sound good over their matching chord in a progression, therefore, they generally form the melodic home bases and safe notes for improvising guitarists. This guitar chord chart will help visualize the notes of each arpeggio on the guitar neck.

Let's clear up any confusion you might have between scales and arpeggios. Scales are a series of notes played one by one that fit sonically within a particular key signature (e.g., G major scale would be G, A, B, C, D, E, F#).

Arpeggios, on the other hand, are a series of notes played one by one that consists of the notes within a particular chord (e.g., G major arpeggio would be G, B, D). Like a scale, an arpeggio is linear: it's a set of notes you play one at a time.

Unlike scales that contain some extra notes not always played in chords, arpeggios use only the notes found in a single chord. Both scales and arpeggios can be played in ascending, descending or random order.

As with scales, there are a variety of shapes to learn when playing arpeggios. There are generally five CAGED shapes for each arpeggio, except the diminished 7th, for which there is just one.

Learn arpeggios in different positions on the neck so you become familiar with the shape of the arpeggio rather than concentrating on which frets to put your fingers in. Master the shapes one at a time.

Although you need to get all five of the shapes down - eventually - it's far better to be able to play one perfectly than five poorly. Practice moving from one arpeggio shape to another, back and forth.

5. Which arpeggios to learn first

While a triad contains only three notes, an arpeggio can be extended with chords like a major seventh, a 9th, 11th, 13th, etc., giving you endless possibilities.

There are several ways you can play arpeggios - alternate picking, legato, hammer-ons and pull-offs, sweep picking and tapping are among them.

For the more experienced player, there also are lead techniques you should be confident with for playing arpeggios at higher speeds, such as string skipping and finger rolling. Experiment with each way of playing these arpeggios to see which one works best for you and your particular style.

A note here about fingerpicking: while fingerpicked chords are technically arpeggios since the chords are broken up, the individual notes aren't typically muted after they're played and thus ring together. The listener can literally hear the entire chord from the vibrations of each individual note.

Arpeggios typically only have one note playing at any given time and are a slightly different idea from broken chords.

7. Grab the arpeggio from the 'root'

When you're brand-new to arpeggios, you always want to start and end on a root note - the note upon which a chord is built. (Literally, the root of the chord.) This will help train your ears to hear the sound of the scale.

Start on the lowest pitched root note, play up as far as you can, then go back down as low as you can, and then back up to the root note.

To play arpeggios, you should mute each note immediately after picking it by lifting the fretting finger. This will keep the notes from 'bleeding' into one another and sounding like a strummed chord. Every note needs to sound individually.

Start off slowly. Perfect your form before you add speed to the mix. You don't want to develop bad habits that you will have to correct later.