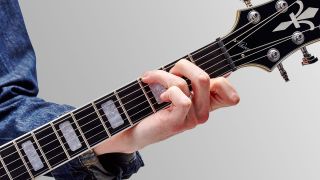 In this Fourth and final installment on the augmented chord, I’d like to point out some musically effective and appealing ways in which songwriters have used it to create ascending harmonic motion and a compelling, dramatic sound within a pedal-point progression, wherein the bass line stays rooted on the same note as other chord tones shift above it.

The Greatest Love of All, first recorded and popularized by George Benson back in 1977, and later covered by Whitney Houston in 1985, features two such uses of an augmented chord within a four-bar progression. The Benson arrangement is in the key of Eb, and at the beginning of the first verse (at 0:25) the chord changes go Eb - Ebaug - Eb6 - Eb7, then Ab - Abaug - Ab6 - Abaug.

A similarly goosebump-inducing move occurs with the following four chords, this time with the chromatic rise happening on the 4th string, with an open G major chord moving to Gaug then G6. But then the movement reverses direction and goes back down to Gaug instead of continuing up to the expected G7.

Baby, Hold On by Eddie Money is built around a two-bar strummed chord vamp that goes back and forth between the same D and Daug voicings shown in bar 1 of FIGURE 1 (no capo in this case), which it does repeatedly, four beats per chord, for the first 43 seconds of the song, after which the internal chromatic climb continues up to D6 then D7, which leads into the song’s chorus, or “release” at 0:48.

Interestingly, in this case, the D7 resolves not to the expected IV chord, G, but to Em7, which is the ii7 (two minor seven) chord in the key of D and has a slightly darker sound.

The Rain Song by Led Zeppelin features a similar augmented climb progression, beginning at 1:07, over which guitarist Jimmy Page adds a tasteful, repeating melodic line that works equally well over each successive chord.

On the original studio recording, which is in the key of G, Page played acoustic and electric guitars, both tuned to the same unusual tuning of, low to high, D G C G C D. The acoustic guitar just strums the chords during this passage while the electric plays the melody.

On the live version, featured on The Song Remains the Same, the crafty guitarist consolidated the two parts into one, which he performed on an electric guitar in the same tuning, only a whole step higher, in the key of A, with his strings tuned, low to high, to E A D A D E.

Adapted to standard tuning in the key of G, FIGURE 2 illustrates the basic voice-leading during this passage. Notice the spine-tingling dissonance created in the Gaug chord by the inclusion of the high D note, the perfect fifth of G, which harmonically clashes with the raised, or 'sharped,' fifth, D#, in the lower octave, creating a major seventh interval between the two notes (similar to what happens in the second chord in Stairway to Heaven between the C and high B notes).

The inclusion of the added A note here, the sus2 of G, further intensifies the dissonance during this second chord, Gaug(sus2), which is welcomingly resolved on the next chord, G6sus2.

Two other famous '70s pop tunes that feature the augmented climb are For Once in My Life by Stevie Wonder, for which the verse progression (at 0:13) follows the basic movement shown in FIGURE 3, and Hooked on a Feeling, as recorded by Blue Suede, with FIGURE 4 outlining the basic changes to the pre-chorus (at 0:29).

Interestingly, on the original arrangement of Hooked, recorded by B. J. Thomas back in 1968, the chromatic climb occurs within the voicings of a non-pedal-point progression that has a moving bassline, via the use of secondary dominant chords, as in FIGURE 5.

Senior Music Editor 'Downtown' Jimmy Brown is an experienced, working musician, performer and private teacher in the greater NYC area whose professional mission is to entertain, enlighten and inspire people with his guitar playing.