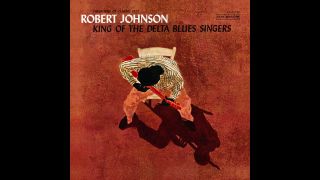 This historic 1936 recording by Robert Johnson of one of his classic songs showcases the pioneering Delta bluesman’s trademark funky, aggressive fingerstyle attack and rhythmically free and quirky phrasing style that often weaves back and forth between groups of triplets, swing eighth notes and duplets (even eighths), with an occasional pair of 16ths thrown in. Those accustomed to the standard, modern 12-bar blues progression can be somewhat baffled and thrown at first, upon hearing and trying to recreate Johnson’s freestyle phrasing, which deviates from the standard form, in terms of when you go to the IV chord, for example, or how many beats you’re supposed to stay on a particular chord. The fact that Johnson was a self-accompanying solo performer gave him the freedom to do whatever the hell he wanted, and that he did!

Many of Johnson’s recordings were intentionally sped up, which raised the pitch, and on this song, he most likely used open G tuning with a capo at the third fret, which is how we transcribed it. Everything sounds in the key of Bb, slightly sharp (more on that in a moment), and all tab numbers are relative to the capo and its “open” strings, which are tabbed as zeros. So when you see a “12” or “5,” that actually means the 15th or eighth fret, respectively (tab number + 3).

In order to play along with the recording, you’ll need to tune all strings approximately a quarter tone sharp. Alternatively, if you have a digital media player with pitch-shifting capability on your computer or phone, you can lower the pitch of the recording playback by approximately 50 cents, to put it at Bb concert key.

Johnson wore a metal slide on his pinkie, which gave his acoustic slide licks that raspy tone and also freed up his first three fingers for regular note fretting, of which he did a lot in this song, as indicated. Good luck, and enjoy!