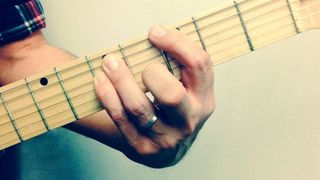 The fourth finger is often neglected when it comes to playing guitar. Well, rock/blues electric guitar, at least.

I notice players opt to do wide stretches between their second and third fingers rather than using the fourth.

As a result, the fourth finger is very underused and gets weak.

This generally begins when someone first starts playing guitar. They gravitate to the stronger fingers so they can begin playing right away, so they use their fourth finger very infrequently and develop a style that excludes it.

By strengthening and using your fourth finger, many doors will open for you, playing-wise and eventually, you might even discover it’s even easier to play certain things. Aside from developing your fourth finger’s strength, the exercises below also can serve as efficient warmup exercises.

This first exercise is a pentatonic shape, string-skipping lick. If you want to work on hybrid picking, you can pluck the high E string with the middle finger of your right hand. I only covered the first position in the example to show what the pattern is, but you can take this lick up to the 12th fret. You will definitely feel this one after a few frets!

Remember, you always want to practice something and have it sound perfect, so slow it down if necessary. Once again, I only covered the first position in this example, but go up to the 12th fret. The finger pattern for this exercise is: 4 – 3 – 2 – 3

The third exercise might look familiar to those who checked out my “Flight of the Bumblebee” lesson. This exercise is the main theme. It’s a great workout for the fourth finger, since there is a five-fret jump between the first finger and the fourth, followed by a descending line with the 4-3-2 fingers and then the fourth again. I’m showing it in one position, but move this around the neck to work out the different fret spacings.

These exercises/warmups are geared more for endurance as opposed to speed, so there's no need to try and blaze through them. Also, it's generally a good idea to dial in a sound that's not that forgiving, something that will let you hear the flaws and inconsistencies in your playing. Definitely use a dry sound with low gain if you use distortion. Try and be as honest as possible with yourself, and you will see quick results for all of your efforts.

Steve Booke is a composer for film and TV from the New York area. His compositions range from orchestral to metal to world styles from every corner of the planet. A graduate of Berklee College of Music, Steve has played guitar for more than 28 years. He has recorded 10 albums of his own and has played on countless others. He plays gigs in the NY area and tours the East Coast with a variety of bands. He has performed with Ben E. King and members of Mahavishnu Orchestra. He endorses D'Addario/Planet Waves, Larrivee Guitars, Levy's Leathers, Peavey, Stylus Pick, Finale PrintMusic, Pigtronix, Tech 21, Toontrack, Graph Tech, Seymour Duncan, Waves, Studio Devil and L.R. Baggs. His music is available on iTunes and Amazon. Steve is now offering Skype lessons and can be contacted at info@stevebooke.com. Visit stevebooke.com and Facebook.com/SteveBookeGuitaristComposer.