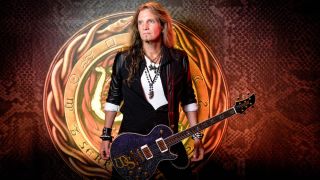 To me, nothing is less tasteful than simply playing a bunch of fast licks to show off your chops on a ballad. I believe that a guitar solo in a ballad should provide a strong melodic hook of its own and balance well against the feeling of the song overall.

With this in mind, I’d like to cite the short solo I crafted for When I Think of You, featured on the new Whitesnake album, Flesh & Blood, as a good example of how to approach soloing over a rock “power ballad.”

When I Think of You is in the key of C major, and a great way to start a solo on a song like this is to emphasize the triadic chord tones of the tonic, or home key.

When I end the phrase, I move back down the triad by starting on the 4th F, before repeating the triadic tones, as illustrated in Fig. 2. Notice that I’m adding a nice slow, wide finger vibrato to every held note here, to evoke a “singing” vocal-like quality.

Fig. 3 shows how I put the two parts together.

I repeat the initial phrase then wrap up the line by melodically setting up the change to the IV (four) chord, F, as shown in Fig. 5.

Now that I’m on F, I like to incorporate a quick downstroke sweep across the triad into the single-note phrase. Fig. 6  illustrates how I start with the sweep and then finish the phrase back in C major pentatonic, ending on D, which is the 5th of the next chord in the progression, G (G, B, D).

Over the next two bars, I recall the initial theme, but now I vary it slightly by playing 16th notes at the end of the first bar of the phrase, followed by an expressive “overbend” of one and one half steps, from G up to Bb, as shown in Fig. 7.

After that, at the end of the solo, I move high up on the neck to create the feeling of a crescendo.

Fig. 8 presents the entire solo. In bar 7, after playing the keynote, C, over the F chord, which is that chord’s 5th (F, A, C), I move up to a C note an octave higher then drop down one fret and bend up to that same note from B, a half step lower, after which I play a descending G major arpeggio over G. I follow this with a whole-step bend from the high C note up to D.

As you can see, I took a balanced, melodic and thought-out approach to this solo, with the idea of serving the song first and foremost, which I think should always be the first priority when soloing.