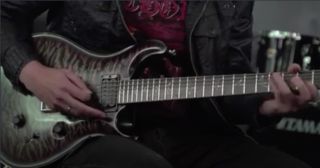 One of my favorite ways to write primary song riffs with Periphery and Haunted Shores is to first come up with a chord progression built from interesting and unusual voicings, then break up each chord into single-note patterns built primarily from the chord tones.

The challenge is to devise different ways to connect all of the chords in the progression via these single-note phrases. This way, I will end up with a riff that melodically “describes” specific and shifting harmonies without actually sounding any chords, per se.

A great example of this technique in practice is the bridge of the song, “Have a Blast,” featured on Periphery II. The first thing I came up with was the chord progression detailed in FIGURE 1: with the guitar tuned to drop-D one whole step down (low to high, C G C F A D), the progression is Gm9sus4 Csus4 F/A Bb(maj7) C/F C/E. You’ll notice that chords like Gm9sus4 and Csus4 convey a really cool, unresolved feeling, creating a harmonic ambiguity that I really love the sound of.

As soon as I had this progression together, I knew I wanted to create a riff out of it. Personally speaking, when I’m looking to write a complex, “note-y” riff, I find it very helpful to come up with the chord progression first. It serves to provide “markers,” so, in the space between chord 1 and chord 2, as long as I land on chord 2 at the right spot, everything else in between is okay and acceptable.

FIGURE 2 illustrates the “Have a Blast” riff as heard on the track: it’s played at a pretty brisk tempo, 200 beats per minute, and bar 1 is built from the notes of the chord played individually, with a finger slide added from A to Bb on the D string. Bar 2 functions as an arpeggiation of G6/7, with the open high E string used as a common tone carried over from bar 1. Bars 3 and 4 feature the full voicings of Csus4 and F/A, as does the beginning of bar 5 with the sounding of the full Bb(maj7) chord.

At the end of this bar, into bar 6, I break into a single-note line built from wide intervals and fretboard slides, which serve to accentuate the harmonically unresolved vibe of the musical passage. Bar 7 begins with an octave slide down from F5, fretted across the bottom three strings at the 15th fret, down to the third fret; the F5 here substitutes for the C/F in the progression, though either could be used. I anticipate the change to C/E by switching to this chord on beat four of bar 7, instead of hitting it squarely on beat one of bar 8.