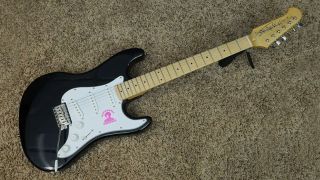 While Jimi Hendrix’s main instrument throughout his career was a Fender Stratocaster, he also played Gibson Vs and SGs. One thing he never played, of course, was a Gibson-branded Strat, primarily because they never existed. But in 2009, they almost did, when Gibson announced a collaboration with Authentic Hendrix LLC to produce three Jimi Hendrix Strat-style guitars.

The entry level packages were touted at the time as “the ultimate tribute to the greatest guitarist who ever lived.” Criticism to the guitars was swift, however, and all mention of them soon disappeared from the Gibson website, and the instruments were never produced for retail.

But now, 10 years following the announcement of the controversial guitar, a prototype surfaced for sale on Reverb.com.

According to the seller, Trogly’s Guitar Show, the guitar, the highest-end bundle of the three models that were in production, was an “unreleased prototype sent out to be used in the promotional DVD that was being made for these instruments.” This bundle was known as the “Experience” package, and was initially offered at an MSRP of $449.99. Trogly’s was selling the bundle for $1,999.

The version that was for sale included the original box and gig bag, as well as the Hendrix strap, Allen key, guitar cable, Hendrix pick and Voodoo Child practice amp that was slated to come with the package .

Though the guitar is no longer available, Trogly’s also uploaded a very cool video of the Hendrix guitar being put through its paces. To hear the never-released instrument in action, check out the video below.