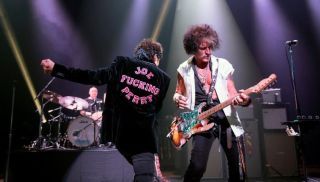 Joe Perry has announced a new leg of tour dates in support of his 2018 solo album, Sweetzerland Manifesto. Perry will be joined by a band featuring his Aerosmith co-guitarist Brad Whitford as well as Extreme vocalist Gary Cherone.

The shows kick off November 30 in Iowa and include stops in New York, Detroit, Los Angeles and other cities.

Earlier this year Perry spoke to Guitar World about how Sweetzerland Manifesto came together: “It’s actually been kind of a work in progress over the last few years,” he said. “Between the Aerosmith tours and then the [Hollywood] Vampires, it was something I would work on when I had time. I think the first track was actually done in 2012. But [in 2017], since January, I had quite a bit of time on my hands in L.A. and I was able to finish it up. I just boiled everything down to what sounded like it would make a good record and I started working on it.”

The full tour itinerary is below, and you can visit JoePerry.com for more details.